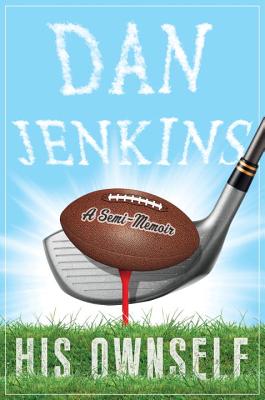 From Dan Jenkins one ofAmerica's most respected andacclaimed sportswriters and author of the bestselling novels "Semi-Tough" and "Dead Solid Perfect" comes a colorful, sentimental, hilarious, and cantankerous memoir abouthis lifelong journey through theworld of sports.

Sometimes, I envy my own childhood, says Dan Jenkins. Many can say that about Dan's whole life. In "His Ownself," we follow him from his youth in Texas, where being a sports fan meant understanding a lot about religion, heroes, and drinking; to his first job at the "Fort Worth Press" working alongside all-time journalistic greats like Blackie Sherrod and Bud Shrake; to the glory days of "Sports Illustrated." One of a handful of writers to establish "SI" as the most important sports magazine ever, Dan refocused the magazine's college football coverage and covered the game's greatest players and coaches. Beyond football, Dan is in the conversation about the best golf writers of all time. Having covered every Masters, U.S. Open, PGA, and British Open for the past fifty years, he takes us behind the scenes to capture the drama as well as the humor of these tournaments as he brings us up close and personal with the likes of Ben Hogan, Arnold Palmer, Jack Nicklaus, and Tiger Woods.
From his friendship and the rounds played with Ben Hogan, to the stories swapped with New York's elite, to the corporate expense accounts abused, Dan lets loose on his experiences in journalism, sports, and showbiz. An honest, one-of-a-kind look at politics, hypocrites, political correctness, the past, the present, Hollywood, money, and athletes, this is a sports fan's dream book. It's a touching, laugh-out-loud tribute to the romanticism of sportswriting and the glory days of sports, told straight from the mouth of the man who saw it all his ownself.

Dan Jenkins is one of America's most acclaimed sportswriters as well as a bestselling novelist. A native Texan, he has spent a lifetime at the typewriter and computer. He might best be known for his twenty-four years of stories in "Sports Illustrated" and now "Golf Digest." Three of his bestselling novels, "Semi-Tough," "Dead Solid Perfect," and "Baja Oklahoma," were made into movies. His sportswriting has won him many awards. In 2012 he was inducted into the World Golf Hall of Fame one of only three writers to be honored thus far and was given the PEN Lifetime Achievement Award for Literary Sports Writing. He is also the 2013 winner of the Red Smith Award, the highest honor in his profession."