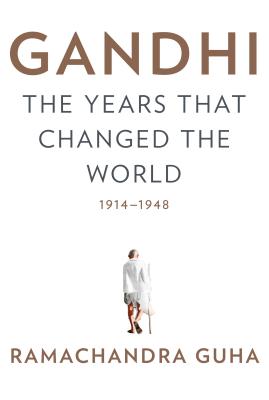 Opening in July 1914, as Mohandas Gandhi leaves South Africa to return to India, Gandhi: The Years That Changed the World, 1914-1918 traces the Mahatma’s life over the three decades preceding his assassination. Drawing on new archival materials, acclaimed historian Ramachandra Guha follows Gandhi’s struggle to deliver India from British rule, to forge harmonious relations between India’s Hindus and Muslims, to end the pernicious practice of untouchability, and to nurture India’s economic and moral self-reliance. He shows how in each of these campaigns, Gandhi adapted methods of nonviolence that successfully challenged British authority and would influence revolutionary movements throughout the world. A revelatory look at the complexity of Gandhi’s thinking and motives, the book is a luminous portrait of not only the man himself, but also those closest to him—family, friends, and political and social leaders.

Praise for Ramachandra Guha's Gandhi: The Years That Changed the World, 1914-1948

“Magisterial . . . balanced and brilliantly readable . . . This biography reads like the final word on its subject. . . . In fact, this masterly assessment should serve for several generations, and for non-Indians as well.”
—Bernard Porter, Literary Review (UK)

“Ramachandra Guha is as dogged a researcher as Gandhi was an agitator. . . . [This book] is the most exhaustive account yet of Gandhi’s temporal and spiritual crusades. A vivid and absorbing read. . . . Gandhi’s character and mission demands rigorous exploration and Guha weaves together the narrative as deftly as Gandhi’s homespun cloth. . . . A remarkable, pioneering leader who changed the world and still has much to teach us.”
—Tarquin Hall, The Sunday Times (UK)

“A massive and much-needed study of [Guha’s] subject’s emergence as a world leader. . . . Superb. On nearly every page, Guha offers evidence why Gandhi remains relevant in the world 70 years after his death.”
—Kirkus Reviews (starred review)

“Guha mines newly discovered archival material to produce a portrait of the Indian leader that is both panoramic in scope and surprisingly intimate, both admiring of Gandhi and cognizant of his flaws. . . . Incisively written, this is a landmark account of Gandhi’s engagement with the world he would transform forever.”
—Publisher’s Weekly (starred review)

“A work of vivid social history as well as biography.”
—Patrick French, The Guardian

“Deeply contextualized, dexterously researched, and judiciously written, this deserves to become the landmark biography of the early Gandhi.”
—Maya Jasanoff, The New Republic

“Guha is a brilliant historian who combines the gift of a storyteller, the discipline of an academic and the critical ability of seeing Gandhi as a fascinating human being, by not placing him on a pedestal. . . . [He] has re-created the past by connecting scattered dots . . . to weave a rich tapestry.”
—Salil Tripathi, San Francisco Chronicle

“In Ramachandra Guha, a great man has found a great biographer, a wise, persistent and elegant historian who has done justice to perhaps his nation’s greatest story.”
—Christopher Kremmer, Sydney Morning Herald

“Fascinating. . . . A biography with a remarkable ear for the resonances of Gandhi’s work and time—for the fan-mail and hate-mail; for overheard disagreements with family and colleagues; for his exchanges with political acquaintances, including his enemies. . . . As exhaustively researched a biography of the African Gandhi as we will have for some time. . . . [Gandhi Before India] triumphs.”
—Elleke Boehmer, The Independent (London)

Ramachandra Guha has taught at Stanford University, the University of Oslo, the Indian Institute of Science, and the London School of Economics. His books include the award-winning India After Gandhi, and the first volume of this biography, Gandhi Before India, which was a 2014 New York Times Notable Book and a San Francisco Chronicle Best Book of the Year. He is the recipient of the Fukuoka Prize for contributions to Asian Studies and of an honorary doctorate in the humanities from Yale University. He lives in Bangalore. www ramachandraguha.in
or
Not Currently Available for Direct Purchase