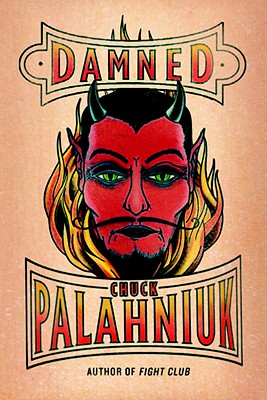 “Are you there, Satan? It’s me, Madison,” declares the whip-tongued thirteen-year-old narrator of Damned, Chuck Palahniuk’s subversive new work of fiction. The daughter of a narcissistic film star and a billionaire, Madison is abandoned at her Swiss boarding school over Christmas, while her parents are off touting their new projects and adopting more orphans. She dies over the holiday of a mari­juana overdose—and the next thing she knows, she’s in Hell. Madison shares her cell with a motley crew of young sinners that is almost too good to be true: a cheerleader, a jock, a nerd, and a punk rocker, united by fate to form the six-feet-under version of everyone’s favorite detention movie. Madison and her pals trek across the Dandruff Desert and climb the treacherous Mountain of Toenail Clippings to confront Satan in his citadel. All the popcorn balls and wax lips that serve as the currency of Hell won’t buy them off.

This is the afterlife as only Chuck Palahniuk could imagine it: a twisted inferno where The English Patient plays on end­less repeat, roaming demons devour sinners limb by limb, and the damned interrupt your dinner from their sweltering call center to hard-sell you Hell. He makes eternal torment, well, simply divine.

"Palahniuk's 12th novel is just as gleefully, vividly, hilariously obscene as you'd expect —and it's also a hell of a lot of fun. [He] has always been known for his pitch-dark satire, and it's evident here in his depiction of the underworld.... As a young adult novel, it's surprisingly sweet, hopeful and empowering; as a satire, it's funny, irreverent and hugely entertaining. 'Hell is other people,' mused Sartre. Leave it to Chuck Palahniuk to tell us that might not be such a bad thing after all."—Michael Schaub, NPR


"Damned is as lively as a book about the dead can be....the Judy Blume book from hell, just as Mr. Palahniuk intended."—Janet Maslin, the New York Times


"And now, from the Well, What Did You Expect file: Chuck Palahniuk imagines a great hell.  His matter-of-fact underworld is the charming setting of Damned, a...very funny coming-of-age (after-you're-dead) novel....Palahniuk's descriptions of hell are inspired, crafted with great comic flair and the brilliant satirical stipulation that the Christian fundamentalists are right: Hell is literal, dinosaur bones were faked by Satan and among the unspeakable demons slurping about is Robert Mapplethorpe....[A] winning and funny book, and near the end, when Maddie seems to be ascending toward a sequel (Purgatory, anyone?), you'll likely want to read that one, too."—Jess Walter, Washington Post


"Damned is gross, sick, nasty, silly, all the things you want from the merry madman of American letters, Chuck Palahniuk. How can you not be instantly transfixed by an opening like this?: 'Are you there, Satan? It's me, Madison. I'm just now arrived here, in Hell, but it's not my fault except for maybe dying from an overdose of marijuana.'
And so begins the kind of goofy, but hypnotically endearing tale of a 13-year-old girl who, completely lost in life, finally starts to discover herself in Palahniuk's demented version of the afterlife....With Damned, [he] opens the fire hose to full bore again, stripping away the veneer on American society and showing us the yucky parts we don't want to see."—Chris Talbot, AP


"...[T]horoughly original...satiric and horrifying, enough so you'll want to repent after you read."—Christian DuChateau, CNN


"Some Fight Club trademarks--youthful disaffection, violence, gross-out humor, a dystopic setting, cultural satire as an extreme sport, a decent helping of third-act pathos--can be seen in...Damned.  Even prepubescent Madison Spencer, the protagonist of Damned, has traits that could be seen as Tyler Durden-esque. She's disaffected from society (i.e., those still alive), she kicks serious butt and is a cultural critic who becomes an unlikely leader....It's hard to pitch the broadly satirical Damned as a useful replacement narrative of life after death, but it's a rollicking adventure of Swiftian proportions, a Valleyfair of the Underworld that, incidentally, shows an overweight teenage girl bringing Satan himself down a peg."—Claude Peck, Minneapolis Star-Tribune


"Damned is typical of Palahniuk's work: a scathing satire that is unfiltered, caustic and smart....[His] descriptions of hell are priceless."—Rege Behe, Pittsburgh Tribune Review

CHUCK PALAHNIUK’s eleven best-selling novels—Tell-All, Pygmy, Snuff, Rant, Haunted, Lullaby, Fight Club, Diary, Survivor, Invisible Monsters, and Choke—have sold more than five million copies in the United States. He is also the author of Fugitives and Refugees, published as part of the Crown Journey Series, and the nonfiction collection Stranger Than Fiction. He lives in the Pacific Northwest.
Loading...
or
Not Currently Available for Direct Purchase