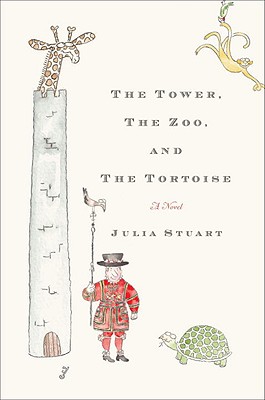 The Tower, the Zoo, and the Tortoise

“Balthazar Jones, a retired military man, is now a Beefeater living in the Tower of London with his family and his 181-year-old pet tortoise named Mrs. Cook. When the queen decides that her menagerie of donated animals should return to live at the Tower as they had centuries before, Balthazar becomes their keeper. This is a touching family story, as well as a delightfully whimsical and zany tale of man and beast. Great fun!”
— Karen T Harris, Bunch of Grapes Bookstore, Vineyard Haven, MA
View the List

Brimming with charm and whimsy, this exquisite novel set in the Tower of London has the transportive qualities and delightful magic of the contemporary classics Chocolat and Amélie.

Balthazar Jones has lived in the Tower of London with his loving wife, Hebe, and his 120-year-old pet tortoise for the past eight years. That’s right, he is a Beefeater (they really do live there). It’s no easy job living and working in the tourist attraction in present-day London.

Among the eccentric characters who call the Tower’s maze of ancient buildings and spiral staircases home are the Tower’s Rack & Ruin barmaid, Ruby Dore, who just found out she’s pregnant; portly Valerie Jennings, who is falling for ticket inspector Arthur Catnip; the lifelong bachelor Reverend Septimus Drew, who secretly pens a series of principled erot­ica; and the philandering Ravenmaster, aiming to avenge the death of one of his insufferable ravens.

When Balthazar is tasked with setting up an elaborate menagerie within the Tower walls to house the many exotic animals gifted to the Queen, life at the Tower gets all the more interest­ing. Penguins escape, giraffes are stolen, and the Komodo dragon sends innocent people running for their lives. Balthazar is in charge and things are not exactly running smoothly. Then Hebe decides to leave him and his beloved tortoise “runs” away.

Filled with the humor and heart that calls to mind the delight­ful novels of Alexander McCall Smith, and the charm and beauty of The Guernsey Literary and Potato Peel Pie Society, The Tower, the Zoo, and the Tortoise is a magical, wholly origi­nal novel whose irresistible characters will stay with you long after you turn the stunning last page.

Praise For The Tower, the Zoo, and the Tortoise…

Praise for THE TOWER, THE ZOO, AND THE TORTOISE:


“The Tower of London’s the center of this hilarious love story about Beefeater Balthazar, his wife, their tortoise and their eccentric friends.  As Balthazar struggles to save his marriage, the rest of the cast carries on in a charming tangle, and when Balthazar is put in charge of a Tower zoo, hilarity breaks out.  Sprinkled with fascinating Tower lore, the book will steal your heart.”
--People Magazine, 4 out of 4 stars

“Charming, witty, and heartfelt, Stuart's second novel is even more delightful than her debut, The Matchmaker of Périgord. A perfect suggestion for fans of The Guernsey Literary and Potato Peel Pie Society; highly recommended.”
--Library Journal

"History buffs, animal lovers, and simply the tenderhearted will swoon over this captivating story."
--Entertainment Weekly, grade A

"The Tower, the Zoo, and the Tortoise is the perfect summer confection — feather-light without being feather-brained. Julia Stuart has penned a work that is original and every-page amusing, and she's peopled it with characters that move into your heart."
-- The Denver Post

“[The] delightfully zany and touching novel, The Tower, The Zoo, and the Tortoise, by British writer Julia Stuart, has jumped the queue to take readers on a fictional romp through the Tower’s realm…With her deft and charming style, Stuart brings this comic story to a satisfying and heartwarming end.”
– The Washington Post

“Julia Stuart spins a confection of whimsy in The Tower, the Zoo and the Tortoise.”
–Cleveland Plain Dealer

"Julia Stuart's sweet The Tower, the Zoo, and the Tortoise is a blessing, undisguised and undeniable, and apparent from the very first sentence...Stuart's clever, amusing and touching story rolls along with wit and tenderness. By the time she concludes this tale at once contemporary and timeless, she and her characters -- biped and quadruped -- have won the reader's heart." -
-- Richmond Times-Dispatch

"Stuart's way of illustrating people's humanity through their bonds with animals makes The Tower, the Zoo and the Tortoise a great novel for discussion, and for reflection on the importance of connecting with all living things in the world around us."
-- Gainesville Times

“A Beefeater, his wife, and their nearly 180-year-old tortoise live in the Tower of London, and if Stuart’s deadly charming sophomore novel (after The Matchmaker of Périgord) is any indication, the fortress is as full of intrigue as ever…the love story is adorable.”
--Publisher’s Weekly

“[The Tower, The Zoo, and The Tortoise] is grounded by the moving central love story. This sweet romp will appeal to history buffs.”
-- Kirkus Reviews

JULIA STUART is the author of one previous novel, "The Matchmaker of Perigord." A native of England, she now resides in Bahrain.

While filled with humour, The Tower, the Zoo and the Tortoise has an undercurrent of heartache. Why do you think the author included the tragic element—could the story have survived without it?

Much is made of British humour. Do you think that there is any difference between British and American humour? If so, how is it demonstrated in the book?

Explain the correlation between Balthazar’s inability to cry about Milo’s death and his obsession with collecting rain drops.

Hebe Jones sarcastically states that “It’s every woman’s dream to live in a castle.” (p. 22) How is this statement not true for Hebe. What do you think is Hebe’s dream?

What is the main attraction between Arthur Catnip and Valerie Jennings? How are they a well-suited match?

How is the lost safe significant to Hebe and Valerie?  Is their any significance to the timing of when the lock is opened?

Reverend Septimus Drew seems to be a walking contradiction. Outside of his hidden hobby, what else is surprising/contradictory about his character?

All of the characters seem to be in search of something—whether lost love, items, loved ones, or animals. Who do you think is the most fulfilled character in the book, if there is any? Why?

Sir Walter Raleigh and many other spirits claim to haunt the Tower. What element do these ghosts add to the book? Is it more spiritual or superstitious?

What is the significance of the urn that Hebe finds in London Underground’s Lost Property Office? Why is she so resolved to find its owner?

Explain how infidelity affects various characters in the book.

How does working in the menagerie make Balthazar feel closer to Milo?

What role does Mrs. Cook play in the novel? She is in part responsible for Balthazar’s job at the menagerie—how else has she played an integral role in Hebe and Balthazar’s lives?

What role does storytelling and letter writing play in the book? Balthazar won both Hebe and Milo’s hearts with his grand storytelling. Who else from the Tower is a raconteur?