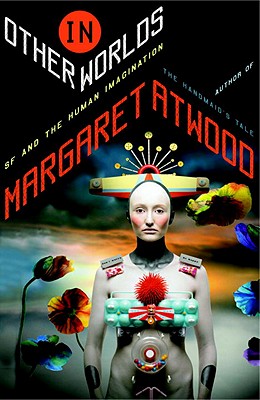 In Other Worlds (Hardcover)

SF and the Human Imagination

At a time when speculative fiction seems less and less far-fetched, Margaret Atwood lends her distinctive voice and singular point of view to the genre in a series of essays that brilliantly illuminates the essential truths about the modern world. This is an exploration of her relationship with the literary form we have come to know as "science fiction,” a relationship that has been lifelong, stretching from her days as a child reader in the 1940s, through her time as a graduate student at Harvard, where she worked on the Victorian ancestor of the form, and continuing as a writer and reviewer.  This book brings together her three heretofore unpublished Ellmann Lectures from 2010: "Flying Rabbits," which begins with Atwood's early  rabbit superhero creations, and goes on to speculate about masks, capes, weakling alter egos, and Things with Wings; "Burning Bushes," which follows her into Victorian otherlands and beyond; and "Dire Cartographies," which investigates Utopias and Dystopias.  In Other Worlds also includes some of Atwood's key reviews and thoughts about the form. Among those writers discussed are Marge Piercy, Rider Haggard, Ursula Le Guin, Ishiguro, Bryher, Huxley, and Jonathan Swift. She elucidates the differences (as she sees them) between "science fiction" proper, and "speculative fiction," as well as between "sword and sorcery/fantasy" and "slipstream fiction." For all readers who have loved The Handmaid's Tale, Oryx and Crake, and The Year of the Flood, In Other Worlds is a must.

MARGARET ATWOOD, whose work has been pub-lished in over thirty-five countries, is the author of more than forty books of fiction, poetry, and critical essays. In addition to "The Handmaid's Tale," her nov-els include "Cat's Eye," shortlisted for the Booker Prize; "Alias Grace," which won the Giller Prize in Canada and the Premio Mondello in Italy; "The Blind Assassin," winner of the 2000 Booker Prize; "Oryx and Crake," shortlisted for the 2003 Booker Prize; and her most recent, "The Year of the Flood."

Praise For In Other Worlds: SF and the Human Imagination…

“Eminently readable and accessible. . . . Atwood revels in all aspects of the SF genre, both high- and low-brow, and her enthusiasm and level of intellectual engagement are second to none.”
—Financial Times

“A witty, astute collection of essays and lectures on science fiction . . . It’s clear that [Atwood's] affection for the genre is deep and genuine . . . Wholly satisfying, with plenty of insights for Atwood and sci-fi fans alike.”
—Kirkus Reviews, starred

“Atwood fans, sci-fi fans, indeed fiction fans, have reason to rejoice. In Other Worlds is a delightful read full of Atwood’s well-honed prose and sly sense of humor. . . . Delving into her personal origins as a sci-fi writer as well as the social and literary origins of the genre in its broadest sense, Atwood offers interesting, entertaining and thoughtful insight into both. For anyone interested in the genesis of fiction, science fiction, or the authors behind either (and of course Atwood in particular), In Other Worlds is a worthwhile and rewarding read.”
—The Miami Herald

“Atwood archly and profoundly delves into her ‘lifelong relationship’ with science fiction in a collection of glimmering essays.”
—Booklist

“A speculative-fiction visionary . . . Atwood has an uncanny knack for tapping into humanity’s uncertain future and predicting mankind’s cultural, scientific and sociopolitical falls from glory . . . Her fiction has peeled back the skin of our disturbing subcutaneous nightmares.”
—Wired

“One of the most intelligent and talented writers to set herself the task of deciphering life in the late twentieth century.”
—Vogue

“Throughout her literary career . . . Margaret Atwood has impressed and delighted readers with her wit, lyric virtuosity, and imaginative acuity.”
—San Francisco Chronicle

“The tremendous imaginative power of [Atwood’s] fiction allows us to believe that anything is possible.”
—New York Times Book Review