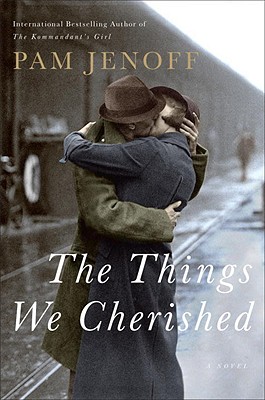 Pam Jenoff, whose first novel, The Kommandant’s Girl, was a Quill Award finalist, a Book Sense pick, and a finalist for the ALA Sophie Brody Award, joins the Doubleday list with a suspenseful story of love and betrayal set during the Holocaust.


An ambitious novel that spans decades and continents, The Things We Cherished tells the story of Charlotte Gold and Jack Harrington, two fiercely independent attor­neys who find themselves slowly falling for one another while working to defend the brother of a Holocaust hero against allegations of World War II–era war crimes.

The defendant, wealthy financier Roger Dykmans, mysteri­ously refuses to help in his own defense, revealing only that proof of his innocence lies within an intricate timepiece last seen in Nazi Germany. As the narrative moves from Philadelphia to Germany, Poland, and Italy, we are given glimpses of the lives that the anniversary clock has touched over the past century, and learn about the love affair that turned a brother into a traitor.

Rich in historical detail, Jenoff’s astonishing new work is a testament to true love under the worst of circumstances.

Praise For The Things We Cherished…

PRAISE FOR THE THINGS WE CHERISHED:

"The Things We Cherished succeeds in opening a provocative window onto the continuing effort to bring Nazi war criminals to justice, and the complexities involved in making legal and moral judgments decades later. The still-vivid memory of the Holocaust energizes this ambitious, sweeping narrative, and Jenoff weaves together the disparate threads of a tale that is at once a historical mystery, a legal thriller, and a romance novel."—The Philadelphia Inquirer

"Further cements Jenoff's reputation for adeptly using the harsh realities of WWII Europe as a context for a timeless love story."—Publishers Weekly

"Pam Jenoff weaves an intriguing and intelligent story with a delicacy that is captivating. The triangular love stories are threaded together with skill and passion, while at the heart of the tale ticks the clock that holds the answers. Jenoff evokes in touching detail a significant point in twentieth-century history and makes it resonate for readers today."—Kate Furnivall, author of the national bestseller The Russian Concubine


PRAISE FOR THE KOMMANDANT’S GIRL:


“With luminous simplicity, Jenoff’s breathtaking debut chronicles the life of a young Jewish bride during the Nazi occupation of Kraków, Poland, in WWII . . . This is histori­cal romance at its finest.” —Publishers Weekly, starred review

“In her moving first novel, Jenoff offers an insightful portrait of people forced into an untenable situation and succeeds in humanizing the unfathomable as well as the heroic.” —Booklist

PAM JENOFF is the author of "The Kommandant's Girl," "The Diplomat's Wife," "Almost Home," and "Hidden Things." She attended George Washington Univer-sity, Cambridge University in England, where she received a master's in history, and the University of Pennsylvania Law School. A former Special Assis-tant to the Secretary of the Army and State Department officer, she lives in Philadelphia, where she works as an attorney.