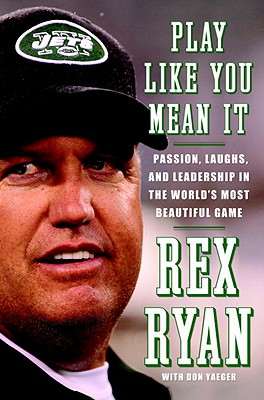 Passion, Laughs, and Leadership in the World's Most Beautiful Game

No football fan will want to be without the book that delivers pure, unfiltered Rex Ryan—head coach of the New York Jets and one of the most popular, outspoken, well-liked, and widely respected personalities in the National Football League.


Rex Ryan is known for his exuberance . . . and Play Like You Mean It explores every aspect of Ryan’s amazing passion for the game of football, plus the lessons he has learned in leadership and motivation during his years in and around the game. In his own words, Ryan takes readers behind the scenes of the NFL as he shares colorful football stories from his experiences with the Jets and the Ravens as well as his years recruiting players, coaching college foot­ball, and growing up as a child of legendary NFL coach Buddy Ryan. Rex’s unique brand of enthusiasm and motiva­tion comes through on every page.

Most of all, fans will get insider access to Ryan’s headline-grabbing, brutally honest, and undeniably entertaining views on the NFL . . . and the very human side of the larger-than-life athletes who devote their lives to the game of foot­ball. From Ryan’s acceptance of the Jets head coaching job to his success in turning around a team that has long been number two in New York, from his drafting and believing in Mark Sanchez to kicking off the 2010 season with massive expectations (and a target on his back)—this book goes deep, and entertains on every level.


Praise For Play Like You Mean It: Passion, Laughs, and Leadership in the World's Most Beautiful Game…

“Rex Ryan has extended his general approach—open, blunt, direct . . . from the spoken word to the written one.”
—The New York Times

REX RYAN is head coach of the National Football League's New York Jets. He is the son of former Philadelphia Eagles and Arizona Cardinals head coach Buddy Ryan and the twin brother of Rob Ryan, defensive coordinator for the Cleveland Browns.

Don Yaeger is a former associate editor for "Sports Illustrated." He is the bestselling author of seventeen books, including "Never Die Easy: The Auto biography of Walter Payton. "