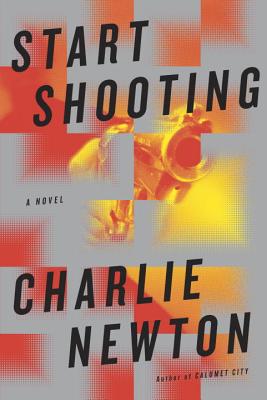 “The best way I can describe the Four Corners neighbor­hood of Chicago is find a length of rebar, scratch a big cross into the concrete, set your feet solid in the quadrant you like best, lean back, and start shooting.”

Officer Bobby Vargas is hard-edged but idealistic, a Chicago cop who stands at the epicenter of a subterranean plot that will have horrific ramifications for both himself and the entire city. Twenty-five years earlier, a gruesome murder rocked the unforgiving streets of Four Corners. Now, sud­denly, a dying Chicago paper is running a serial exposé on new evidence in that old case, threatening to implicate Bobby and his older brother, Ruben—a decorated, high-ranking detective and cop- prince of the streets. The smear campaign stirs up decades-old bad blood, leading the Vargas brothers down an increasingly twisted and terrifying path, where the sins of the past threaten to destroy what remains of the truth.

As readers and critics discovered in his first novel, Calumet City, Charlie Newton’s Chicago is a landscape as brutal and poignant as any in modern crime fiction—a multi-faceted, shockingly violent labyrinth of gangland politics, political backstabbing, corporate malfeasance, and, possi­bly, hope. Start Shooting is a riveting read.

CHARLIE NEWTON'S first novel, "Calumet City, " was a finalist for the Edgar, International Thriller Writers, and Macavity awards, among others. This is his second novel.

“Can’t get enough of Chicago? The most dynamic character in Charlie Newton’s…terrific [START SHOOTING] is the Windy City--the down and dirty side of it, anyway…the voices reverberate in your ears, and the smell of gunfire lingers long after the last man is down.”  New York Times Book Review

“The vision of Chicago in this firecracker crime novel is one teeming with violence and venality, where  Al Capone has been replaced by gangbangers and authorities are far from untouchable…his lit-fuse urgency hits you right in the gut.”  Entertainment Weekly

"Charlie Newton is the real goods, delivering bare-knuckles crime fiction with life-or-death action, visceral language, and characters whose flaws and humanity pull us into his cops-and-crime landscape. I was completely won over. Start Shooting is a superb balance between adrenaline and pathos." -- Robert Crais, New York Times bestselling author of The Sentry


“[Charlie] Newton has given us a frenzied, frenetic, driving, punching, shouting, pinwheel of revelations about life in the wrong lane…I wanted to put the book down and shout, ‘Whoa, whoa! Slow it down just a little, please.’ But I couldn’t put the book down.” -- Alan Cheuse, Chicago Tribune

“Doing for the Windy City what The Wire did for Baltimore and James Ellroy's novels did for Los Angeles, [Start Shooting] uncovers with sardonic intensity the deep and seemingly irreversible connections between crime, politics, business and tabloid journalism….[Charlie] Newton delivers [a] thrilling, densely packed novel that makes most Chicago crime thrillers seem tame.” Kirkus (starred review)

"A vast cast of characters, many deeply evil; numerous subplots...; copious violence and car chases; a granular look at the city; and a writing style that might be called fever dream....Arleen and Bobby are wonderfully realized characters, and the beyond-frenzied action is certainly hypnotic. Newton has created the writerly equivalent of every great Chicago bluesman who ever lived playing together; all soloing simultaneously. It might be messy, but you wouldn't want to miss a single note."--Booklist (starred review)

"Charlie Newton bar none is the most talented new voice of noir. Start Shooting had me on the edge of my seat for hours: dark, chilling, gripping, clever...Raymond Chandler would be proud."--Andrew F. Gulli, The Strand Magazine