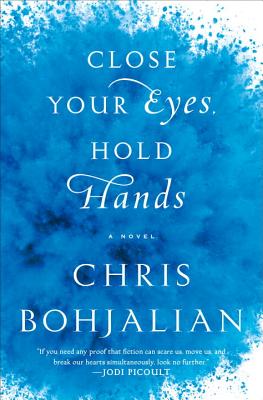 A heartbreaking, wildly inventive, and moving novel narrated by a teenage runaway, from the bestselling author of"Midwives"and"The Sandcastle Girls."
"Close Your Eyes, Hold Hands"is the story of Emily Shepard, a homeless teen living in an igloo made of ice and trash bags filled with frozen leaves. Half a year earlier, a nuclear plant in Vermont's Northeast Kingdom had experienced a cataclysmic meltdown, and both of Emily's parents were killed. Devastatingly, her father was in charge of the plant, and the meltdown may have been his fault. Was he drunk when it happened? Thousands of people are forced to flee their homes in the Kingdom; rivers and forests are destroyed; and Emily feels certain that as the daughter of the most hated man in America, she is in danger. So instead of following the social workers and her classmates after the meltdown, Emily takes off on her own for Burlington, where she survives by stealing, sleeping on the floor of a drug dealer's apartment, and inventing a new identity for herself -- an identity inspired by her favorite poet, Emily Dickinson. When Emily befriends a young homeless boy named Cameron, she protects him with a ferocity she didn't know she had. But she still can't outrun her past, can't escape her grief, can't hide forever and so she comes up with the only plan that she can.
A story of loss, adventure, and the search for friendship in the wake of catastrophe, "Close Your Eyes, Hold Hands"is one of Chris Bohjalian's finest novels to date breathtaking, wise, and utterly transporting.

"I have a new favorite Chris Bohjalian novel.  Close Your Eyes, Hold Hands is a book I wish I'd been smart enough to write:  a masterpiece of narrative voice, of emotion, and of how – as Emily Dickinson might say – the sparest of words can hold a wealth of pain. If you need any proof that fiction can scare us, move us, and break our hearts simultaneously – look no further." – Jodi Picoult

CHRIS BOHJALIAN is the critically acclaimed author of seventeen books, including the "New York Times" bestsellers "The Sandcastle Girls, Skeletons at the Feast, The Double Bind, " and "Midwives." His novel "Midwives" was a number one "New York Times" bestseller and a selection of Oprah's Book Club. His work has been translated into more than twenty-five languages, and three of his novels have become movies ("Secrets of Eden, Midwives, " and "Past the Bleachers"). He lives in Vermont with his wife and daughter. Visit him at www.chrisbohjalian.com or on Facebook.
Loading...
or
Not Currently Available for Direct Purchase