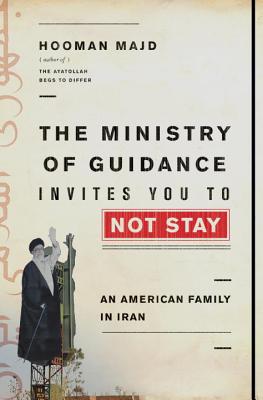 The Ministry of Guidance Invites You to Not Stay

An American Family in Iran

With U.S.–Iran relations at a thirty-year low, Iranian-American writer Hooman Majd dared to take his young family on a year-long sojourn in Tehran. The Ministry of Guidance Invites You to Not Stay traces their domestic adventures and closely tracks the political drama of a terrible year for Iran's government.

It was an annus horribilis for Iran's Supreme Leader. The Green Movement had been crushed, but the regime was on edge, anxious lest democratic protests resurge. International sanctions were dragging down the economy while talk of war with the West grew. Hooman Majd was there for all of it. A new father at age fifty, he decided to take his blonde, blue-eyed Midwestern yoga instructor wife Karri and his adorable, only-eats-organic infant son Khash from their hip Brooklyn neighborhood to spend a year in the land of his birth. It was to be a year of discovery for Majd, too, who had only lived in Iran as a child.

The book opens ominously as Majd is stopped at the airport by intelligence officers who show him a four-inch thick security file about his books and journalism and warn him not to write about Iran during his stay. Majd brushes it off—but doesn't tell Karri—and the family soon settles in to the rituals of middle class life in Tehran: finding an apartment (which requires many thousands of dollars, all of which, bafflingly, is returned to you when you leave), a secure internet connection (one that persuades the local censors you are in New York) and a bootlegger (self-explanatory). Karri masters the head scarf, but not before being stopped for mal-veiling, twice. They endure fasting at Ramadan and keep up with Khash in a country weirdly obsessed with children.

All the while, Majd fields calls from security officers and he and Karri eye the headlines—the arrest of an American "spy," the British embassy riots, the Arab Spring—and wonder if they are pushing their luck. The Ministry of Guidance Invites You to Not Stay is a sparkling account of life under a quixotic authoritarian regime that offers rare and intimate insight into a country and its people, as well as a personal story of exile and a search for the meaning of home.

Praise For The Ministry of Guidance Invites You to Not Stay: An American Family in Iran…

“The Ministry of Guidance reveals an Iran far more nuanced, sophisticated and affluent than most Western readers might imagine. Calling ‘the cable guy’ in Tehran is not so different from home as is negotiating terms with a babysitter or connecting on Facebook (17 million Persian users, Majd writes). Iranians, it turns out, have a lot more in common with Americans than we’ve been told the past 30-some years….The Ministry of Guidance Invites You to Not Stay completes a trilogy that illuminates the politics, society, and culture of modern Iran through the eyes of the decidedly hip, well-connected Majd. But it’s not just a book about Iran – it's a personal story that will speak to any readers who have ever been disassociated from home (whether by travel or migration), struggled to navigate a new culture (or return to a once familiar one), or attempted to come to terms with their own foreignness as they try to make a strange land a place they can call home.”—Christian Science Monitor

“No one takes you inside Iran like Hooman Majd, whose keen observations and rich writing tell the story of an illuminating, delightful, and at times, horrifying journey. You will relish this book like a good meal.”
—Ann Curry

“In The Ministry of Guidance Invites You to Not Stay, Hooman Majd, a longtime New Yorker, Iranian-born, has crafted a memorable account of his attempt to move back to the land of his birth with his American wife and their baby son. With a keen eye for the telling detail and a refreshingly mordant wit, Majd offers glimpses of life inside the Islamic Republic in all of its unresolved contradictions.”
—Jon Lee Anderson

Born in Iran and educated in the US, HOOMAN MAJD was a music executive before turning to writing. He has written for "GQ," "The New York Times," "The New Yorker," "The Daily Beast," and "Salon," among others. He continues to live in Brooklyn with his family.