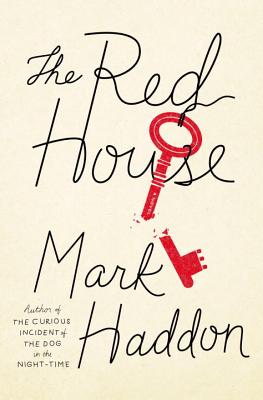 “Haddon is a master craftsman, and one of the great delights of The Red House is the way he seamlessly weaves together a narrative from the perspectives of a number of extremely different individuals. Focusing on two families on a trip to the country -- each with their own issues and secrets -- and the interplay between characters, Haddon has given us another wonderful and surprising novel.”
— Carol Schneck, Schuler Books & Music, Okemos, MI
View the List

An dazzlingly inventive novel about modern family, from the author of The Curious Incident of the Dog in the Night-time

The set-up of Mark Haddon's brilliant new novel is simple: Richard, a wealthy doctor, invites his estranged sister Angela and her family to join his for a week at a vacation home in the English countryside. Richard has just re-married and inherited a willful stepdaughter in the process; Angela has a feckless husband and three children who sometimes seem alien to her. The stage is set for seven days of resentment and guilt, a staple of family gatherings the world over.

But because of Haddon's extraordinary narrative technique, the stories of these eight people are anything but simple. Told through the alternating viewpoints of each character, The Red House becomes a symphony of long-held grudges, fading dreams and rising hopes, tightly-guarded secrets and illicit desires, all adding up to a portrait of contemporary family life that is bittersweet, comic, and deeply felt. As we come to know each character they become profoundly real to us. We understand them, even as we come to realize they will never fully understand each other, which is the tragicomedy of every family.

The Red House is a literary tour-de-force that illuminates the puzzle of family in a profoundly empathetic manner -- a novel sure to entrance the millions of readers of The Curious Incident of the Dog in the Night-Time.

MARK HADDON is the author of the international bestseller, "The Curious Incident of the Dog in the Night-Time," which won the "Los Angeles Times" Book Prize for First Fiction and the Whitbread Book of the Year award; and the "New York Times "bestseller "A Spot of Bother." In addition to "The Talking Horse" and the "Sad Girl" and the "Village Under the Sea," a collection of poetry, Haddon has also written and illustrated numerous award-winning children's books and television screenplays.

Praise For The Red House…

"Absorbing....  Even if you don’t see your relatives in these pages, you’ll learn to appreciate their ungainly efforts to reach out and maintain those old filial bonds....What holds our interest is Haddon’s extraordinary sympathy, his ability to reveal what stirs these people beneath their congenial holiday faces....a brilliant portrayal of the asymmetric nature of resentment within families....But it’s Hardon’s peculiar structure that raises this family drama to something exceptional. He’s perfected a constantly shifting perspective that keeps our sympathies from taking root in any one of these characters....the effect is symphonic....Haddon wends a careful path in this novel between the effervescent comedy of quirky families and the bitter tragedy of dysfunctional ones."
--The Washington Post

"A story of remarkable complexity, exploring the rich interior lives of his characters.....Most impressive is the ambitious structure of this novel....there's an abundance of dark humor....the story moves along swiftly and seamlessly."
--USA Today


“In this absorbing, Virginia Woolf-esque novel by the author of The Curious Incident of the Dog in the Night-time, an extended family gathers for a  week in the English countryside. Perfect (or not) for that holiday with the in-laws.”
--People

"“The story unfolds from all eight characters’ points of view, a tricky strategy that pays off, letting Haddon dig convincingly into all of the failures, worries and weaknesses that they can’t leave behind"
--Entertainment Weekly

“A beautiful and authentic portrait of a blended family and the secrets, grudges and desires that keep its members apart”
--Real Simple

"A fun, fast-paced read from one of our finest storytellers"
--Dallas Morning News

"THE RED HOUSE employs the same empathy for its varied characters and the same sharply observed, skewed view of the 'ordinary' world....creates a mosaic whose pieces add up to a picture no one character can see....satisfying and believable....Haddon writes with a gentle, compassionate sense of irony"
--Columbus Dispatch


"Haddon peers inside the messy dynamics of a group of relatives, each grappling with their own fears and trying to make sense of themselves as a family....braids together themes of sexual identity, parental insecurity and sibling rivalry, and no one gets away unscathed"
--NPR

"Exciting and accessible"
--The Daily Beast

"Surprising and deeply moving....the set-up ensures that there will be revelations, twists and shifts in the family dynamic....sustaining suspense....while enriching the developing relationships among people....organic rather than contrived, the characters convincing throughout, the tone compassionate and the writing wise. A novel to savor."
--Kirkus, starred review

“[Haddon] is almost unrivalled at the notoriously tricky task of giving an authentic voice to children, and his ability to pinpoint the comic aspects of the everyday scenarios.”
--Sunday Times

"Hugely enjoyable, sympathetic novel would make perfect reading for those setting out on holiday"
--The Observer

"[Haddon is] a master craftsman"
--The Independent

"With writing as elegant and truthful as this, readers will wish to keep their copies close at hand to savour again.”
--The Daily Mail

"[Haddon] writes like a dream. Never showy, but often lyrically descriptive, he takes the reader with him to the core of this crazy family. Secondly, he has a true understanding of the human heart."
--Spectator

"It’s every bit as charmingly idiosyncratic as his brilliant The Curious Incident of the Dog in the Night-Time.”
--The Daily Mirror

"Engaging....From the first page in which the train carrying Dominic and Angela's family "unzips the fields", there is a vigor to Haddon's prose which carries you along. I read it twice, both times with enjoyment.”
--The Independent

“A triumph of empathy.”
—The New Yorker

“Haddon’s book illuminates the way one mind works so precisely, so humanely, that it reads like both an acutely observed case study and an artful exploration of a different ‘mystery’: the thoughts and feelings we share even with those very different from us.”
—Entertainment Weekly

Praise for A Spot of Bother

“So astute, so gently funny, so touching, that you get caught up in the fate of the well-meaning, if slightly imprudent, Hall family.”
—USA Today

“Snaps, crackles and pops with humor and pathos as Haddon depicts family members driving one another crazy . . . sparklingly written with short, punchy chapters . . . Haddon deftly pulls this off with what we can now hail as his trademark tenderness.”
—Los Angeles Times

“Superbly entertaining . . . Haddon’s particular genius, however, lies in the unobtrusive way he makes us identify with his characters . . . fine craftsmanship.”
—The Washington Post Book World


“Totally brilliant . . . [Haddon is]so wondrously articulate, so rigorous in thinking through his characters’ mind-sets, that A Spot of Bother serves as a fine example of why novels exit.”
—The New York Times Book Review

What role does the Welsh landscape play in The Red House? How might this story be different if it portrayed an American family? Where would you set the story and what points of American culture would you add?

To what extent, if at all, did you see your family or your own family vacations reflected in The Red House?

What roles do death and absence play in the narrative? Discuss mortality as it relates to the characters of Angela, Karen, and Melissa.

Which character did you identify with most? Which characters would you want to spend a week with in a secluded vacation setting? Who seemed the most likable? The most perplexing?

Discuss the dining room table as a microcosm of the familial vacation experience. How do shifting places at the table reflect changing relationships and characters’ internal and external struggles? Talk about the role seating order plays in your own family or groups of friends.

Discuss inner monologue as a plot device. What are the recurring themes of the inner monologue of each character? Give examples of how the characters’ inner monologues come to light and come to the attention of other characters. How do the involved parties deal with the divulgence of these intimacies?

Romance, lust and longing weave themselves through the novel. Discuss the romantic and sexual urges of Louisa, Dominic, and Daisy. Are there any parallels between them? How do romantic overtures affect the other inhabitants of the red house?

What role does the house itself play in this novel? How might a different physical structure bring about alternate results for the characters? On another structural note, the novel is broken into sections, each titled with a day of the week.

Ian McEwan, Shakespeare, and the Legend of the Willow (Koong-se and Chang) all make appearances in the novel. What functions do these literary references serve in plot and character development?

On page 116, Daisy is reading Dracula, which Haddon quotes: “We need have no secrets amongst us. Working together and with absolute trust, we can surely be stronger than if some of us were in the dark.” What resonance does this quote have in this context? How does it relate to matters at hand between the members of Richard’s and Angela’s family? To your own family?

From the start of the book, photography comes into play as a method of immortalizing landscape and human experience. What visual snapshots stick with you from the novels?

Where do you think the members of Richard and Angela’s families will find themselves in two months? Five years? Two decades? How might incidents from the vacation play themselves out in the future?

Benjy’s inscription in the visitor’s book reads, “I liked walking up the hill and the rain storm and shepherds pie at the granary.” Do you think this is poignant? Explain why or why not. What is left out?