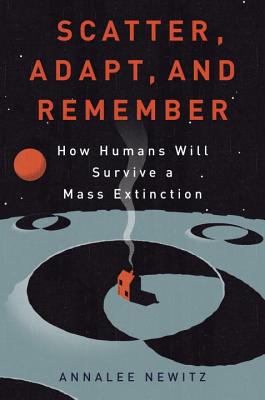 In its 4.5 billion–year history, life on Earth has been almost erased at least half a dozen times: shattered by asteroid impacts, entombed in ice, smothered by methane, and torn apart by unfathomably powerful megavolcanoes. And we know that another global disaster is eventually headed our way. Can we survive it? How?

As a species, Homo sapiens is at a crossroads. Study of our planet’s turbulent past suggests that we are overdue for a catastrophic disaster, whether caused by nature or by human interference.
It’s a frightening prospect, as each of the Earth’s past major disasters—from meteor strikes to bombardment by cosmic radiation—resulted in a mass extinction, where more than 75 percent of the planet’s species died out. But in Scatter, Adapt, and Remember, Annalee Newitz, science journalist and editor of the science Web site io9.com explains that although global disaster is all but inevitable, our chances of long-term species survival are better than ever. Life on Earth has come close to annihilation—humans have, more than once, narrowly avoided extinction just
during the last million years—but every single time a few creatures survived, evolving to adapt to the harshest of conditions.
This brilliantly speculative work of popular science focuses on humanity’s long history of dodging the bullet, as well as on new threats that we may face in years to come. Most important, it explores how scientific breakthroughs today will help us avoid disasters tomorrow. From simulating tsunamis to studying central Turkey’s ancient underground cities; from cultivating cyanobacteria for “living cities” to designing space elevators to make space colonies cost-effective; from using math to stop pandemics to studying the remarkable survival strategies of gray whales, scientists and researchers the world over are discovering the keys to long-term resilience and learning how humans can choose life over death.
Newitz’s remarkable and fascinating journey through the science of mass extinctions is a powerful argument about human ingenuity and our ability to change. In a world populated by doomsday preppers and media commentators obsessively forecasting our demise, Scatter, Adapt, and Remember is a compelling voice of hope. It leads us away from apocalyptic thinking into a future where we live to build a better world—on this planet and perhaps on others. Readers of this book will be equipped scientifically, intellectually, and emotionally to face whatever the future holds.

Praise For Scatter, Adapt, and Remember: How Humans Will Survive a Mass Extinction…

Praise for Scatter, Adapt, and Remember:

"As Walking Dead fans know, few things are more enjoyable than touring the apocalypse from the safety of your living room. Even as Scatter, Adapt, and Remember cheerfully reminds us that asteroid impacts, mega-volcanos and methane eruptions are certain to come, it suggests how humankind can survive and even thrive. Yes, Annalee Newitz promises, the world will end with a bang, but our species doesn't have to end with a whimper. Scatter, Adapt, and Remember is a guide to Homo sapiens' next million years. I had fun reading this book and you will too."
—Charles Mann, author of 1491


“Scatter, Adapt, and Remember is a refreshingly optimistic and well thought out dissection of that perennial worry: the coming apocalypse. While everyone else stridently shouts about the end of days, this book asks and answers a simple question: ‘If it's so bad, then why are we still alive?’ I found myself in awe of the incredible extinction events that humankind—and life in general—has already survived, and Newitz inspires us with engaging arguments that our race will keep reaching the end of the world and then keep living through it. Scatter, Adapt, and Remember intimately acquaints the reader with our two-hundred-thousand-year tradition of survival—nothing less than our shared heritage as human beings.”
—Daniel H. Wilson, author of Robopocalypse and Amped


“One part OMNI-grade optimistic futurism; one part terrifying disaster-history; entirely awesome and inspiring. A FTL rocket-ride through extinction and its discontents.”
—Cory Doctorow, author of Down and Out in the Magic Kingdom


“This book is not a survivalist guide but rather a grand historical overview that puts humanity in the middle of its evolution, with fascinating looks both back and forward in time. An enormous amount of knowledge is gathered here, and the book accomplishes something almost impossible, being extremely interesting on every single page. A real pleasure to read and think about.”
—Kim Stanley Robinson, author of the Mars Trilogy


"One of the best popular science books I've read in a long, long time—and perhaps the only one that takes such a clear-eyed view of the future."
—Seth Mnookin, author of The Panic Virus


"An animated and absorbing account into how life has survived mass extinctions so far…and what we need to do to make sure humans don’t perish in the next one... Humans may be experts at destroying the planet, but we are no slouches at preserving it, either, and Newitz’s shrewd speculations are heartening."
—Kirkus Reviews

ANNALEE NEWITZ is the founding editor of the science Web site io9.com and a journalist with a decade's experience in writing about science, culture, and the future for such publications as "Wired," "Popular Science," and "The Washington Post." She is the editor of the anthology "She's Such a Geek: Women Write About Science, Technology, and Other Geeky Stuff" and was a Knight Science Journalism Fellow at MIT. She lives in San Francisco.