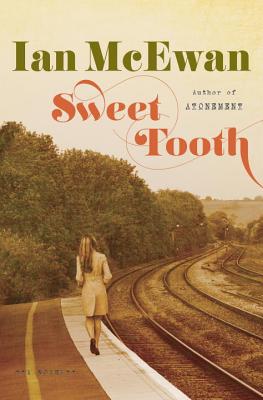 In this stunning new novel, Ian McEwan’s first female protagonist since Atonement is about to learn that espionage is the ultimate seduction.

Cambridge student Serena Frome’s beauty and intelligence make her the ideal recruit for MI5. The year is 1972. The Cold War is far from over. England’s legendary intelligence agency is determined to manipulate the cultural conversation by funding writers whose politics align with those of the government. The operation is code named “Sweet Tooth.”

Serena, a compulsive reader of novels, is the perfect candidate to infiltrate the literary circle of a promising young writer named Tom Haley. At first, she loves his stories. Then she begins to love the man. How long can she conceal her undercover life? To answer that question, Serena must abandon the first rule of espionage: trust no one.

Once again, Ian McEwan’s mastery dazzles us in this superbly deft and witty story of betrayal and intrigue, love and the invented self.

"McEwan's most stylish and personal book to date ... The year's most intensely enjoyable novel."
—The Daily Beast

"A tightly crafted, exquisitely executed page-turner — a post-modern hall of mirrors asking savvy questions about identity, all concealed in the immersive trappings of a Victorian novel complete with a marriage plot. There's such rich pleasure and vulnerability in McEwan's storytelling, such style and heart in his well-honed sentences."
—USA Today

"Ian McEwan’s delicious new novel provides all the pleasures one has come to expect of him: pervasive intelligence, broad and deep knowledge, elegant prose, subtle wit and, by no means least, a singularly agreeable element of surprise."
—Washington Post

"As entertaining as a very intelligent novel can be and vice versa ... Sweet Tooth is extremely clever in both the British and American senses (smart as well as amusingly tricky) and his most cheerful book by far."
—Kurt Andersen, The New York Times Book Review

"McEwan has pulled off something remarkable here: Sweet Tooth is a suspenseful plot-and-character-driven novel with an unexpected postmodern twist. It’s Jane Austen meets John Le Carré meets John Barth — not a combination that I imagine anyone has ever walked into a bookstore seeking. But it’s one whose delights turn out to be considerable."
—The Boston Globe

"An engaging book that's as much suspenseful drama as it is romantic love story."
—NPR

"Tricky and captivating ... This is a book you can think about for a long time, a book that lingers and disturbs, in a good way."
—Katie Roiphe, Slate

"With his new novel, Ian McEwan looks set to have his biggest success since 2001's Atonement, and deservedly so. Both books feature eloquent and convincing female narrator/protagonists and have the same sly concerns: the uses and misuses of the imagination ... A story set in a bitter climate, but one told with such poise and craft that the novel is, one has to say, ultimately a sweet read."
—Star Tribune

"A subtly and sweetly subversive novel [that is a] masterful manipulation of the relationship(s) between fiction and truth ... Britain’s foremost living novelist has written a book as drily funny as it is thoughtful."
—Kirkus Reviews, starred review

“This is a great big beautiful Russian doll of a novel, and its construction – deft, tight, exhilaratingly immaculate – is a huge part of its pleasure ... Sweet Tooth is a comic novel and a novel of ideas, but, unlike so many of those, it also exerts a keen emotional pull.”
—Julie Myerson, The Observer

"Thoroughly clever ... a sublime novel about novels, about writing them and reading them and the spying that goes on in doing both ... McEwan has spied on real life to write Sweet Tooth, and in reading it we are invited to spy on him ... Rich and enjoyable."
—Financial Times

"A wisecracking thriller hightailing between love and betrayal, with serious counter-espionage credentials thrown in … This is ultimately a book about writing, wordplay and knowingness."
—The Telegraph

“McEwan writes with his usual clinical precision, brilliantly evoking the London of dingy Camden flats, the three-day week and IRA atrocities. His assumption of a female persona is pitch-perfect.”
—Daily Mail

“A disgraced spy, a failed mission, a ruined lover: Ian McEwan’s new novel, Sweet Tooth, opens at full tilt ... The novel’s pleasures are multiple and, as always with McEwan, they begin with the storytelling.”
—Bloomberg Businessweek

“Sweet Tooth takes the expectations and tropes of the Cold War thriller and ratchets up the suspense ... A well-crafted pleasure to read, its smooth prose and slippery intelligence sliding down like cream.”
—The Independent

"McEwan fans won’t be disappointed by Sweet Tooth, and newcomers to the author will be meeting him at the top of his game."
—The Globe and Mail

“McEwan is one of the most gifted literary storytellers alive.”
—James Wood, The New Republic

“McEwan is in the first tier of novelists writing in English today . . . He has achieved a complete mastery of his craft.”
—The New York Observer

IAN McEWAN is the bestselling author of fourteen books, including the novels Solar; On Chesil Beach; Saturday; Atonement, winner of the National Book Critics Circle Award and the W. H. Smith Literary Award; The Comfort of Strangers and Black Dogs, both shortlisted for the Booker Prize; Amsterdam, winner of the Booker Prize; and The Child in Time, winner of the Whitbread Award; as well as the story collections First Love, Last Rites, winner of the Somerset Maugham Award, and In Between the Sheets. He lives in England.