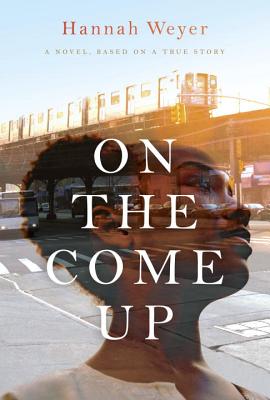 On the Come Up

A Novel, Based on a True Story

Based on a true story, an impassioned and propulsive debut novel about a headstrong girl from Far Rockaway, Queens, who is trying to find her place in the world

Written in an urban vernacular that’s electrifying and intimate, On the Come Up introduces a heroine whose voice is irrepressible, dynamic, and unstintingly honest. Thirteen-year-old AnnMarie Walker dreams of a world beyond Far Rockaway, where the sway of the neighborhood keeps her tied to old ideas about success. While attending a school for pregnant teens, AnnMarie comes across a flyer advertising movie auditions in Manhattan. Astonishingly, improbably, and four months before she’s due to give birth—she lands a lead role. For a time, AnnMarie soars—acting for the camera, flying to the Sundance Film Festival, seeing her face on-screen. But when the film fades from view and the realities of her life set in, AnnMarie’s grit and determination are the only tools left to keep her moving forward.

Told with remarkable compassion and based on the real-life story of Anna Simpson, whom the author met during the filming of the award-winning Our Song, Hannah Weyer’s debut novel is an incredible act of literary ventriloquism that powerfully illuminates the lives of the urban unseen.


Praise For On the Come Up: A Novel, Based on a True Story…

"Meet AnnMarie. She's 13, pregnant and living in a gang-ridden housing project. Not a promising scenario. But the heroine of Weyer's luminous debut turns out to be a survivor with rare spirit. She gets herself cast in an indie movie, attends its Sundance premiere and then, back in the ‘hood, struggles to build a life for herself and her baby. AnneMarie is based on a real person, which makes it all the sweeter to cheer her on." —People, four stars


"I couldn't put this book down. This world, this voice, this young woman are all so vividly raw and honest, that my heart was broken open, and I was hooked until the very last page." —Kerry Washington, actress, Scandal and  Django Unchained

"[Weyer] writes with confidence and agility, and readers will quickly sink into the groove of her storytelling ... AnnMarie's interior monologues feel hypnotic and impromptu, silkily cadenced with what freestyle rappers call flow ... On the Come Up isn't a cloying rags-to-celebrity tale ...  'Having gone out into the world and come back again' gives AnnMarie a glimpse of a future beyond Far Rockaway. Ms. Weyer convincingly charts the brave steps she takes to get there." —The Wall Street Journal

"I fell in love with AnnMarie Walker, a hopeful and headstrong heroine who invents her own chances, turning the smallest opportunities into rare achievements. Here’s a book for anyone who’s ever seen the way the sun shines in a classroom they cannot enter and still wanted that light to shine on them. First you have to want it and this is how it’s done, from victim to victor. A remarkable gift to readers." —Tupelo Hassman, author of Girlchild

"Pitch-perfect. It’s impossible not to root for AnnMarie, a heroine as resilient as she is vulnerable. Weyer is a deeply humane writer who pulls the reader into an inner-city world that’s utterly distinct, yet profoundly relatable.” —Jonathan Odell, author of The Healing

"Hannah Weyer proves to be a formidable ventriloquist ... [C]onvincing and colorful ... [A] moving account of AnnMarie's struggle to ... leverage her experiences into a better life." —San Francisco Chronicle

"AnnMarie is a tenacious and lovable character. It is easy to root for her as she gropes and stumbles her way through the lessons of life without the benefit of role models or money, and the conclusions she comes to are surprisingly pertinent for all. Fans of Sapphire's Push will especially appreciate the honesty and realism of filmmaker and first-novelist Weyer's writing." —Booklist

Hannah Weyer is a filmmaker whose narrative and documentary films have been screened at the Human Rights Watch and the New York Film Festivals and have won awards at the Sundance, Locarno, Melbourne, Doubletake, and South by Southwest Film Festivals. Her screenwriting credits include "Life Support" (2007), directed by Nelson George, which earned a Golden Globe Award for its lead actress, Queen Latifah. Weyer has worked with teens in the media arts for the past fifteen years and, along with her husband, the filmmaker Jim McKay, started an after-school film club at a public high school in Brooklyn. "On the Come Up" is her first novel.
Loading...
or
Not Currently Available for Direct Purchase