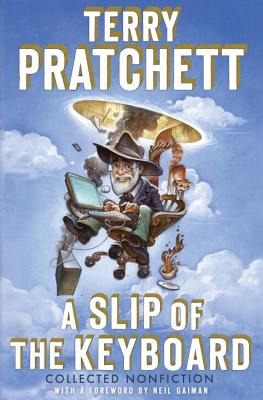 A Slip of the Keyboard

Terry Pratchett has won the hearts and minds of readers around the globe with his bestselling Discworld series of novels. But what his many fans may not realize is that he has been writing nonfiction throughout his career. Some of it relates to Discworld, of course, but much of it—especially in recent years—is part of his outspoken campaigns for causes such as Alzheimer‘s research and animal rights.


A Slip of the Keyboard is the first collection of Pratchett’s nonfiction work, and it brings together the finest examples of his extraordinary wit and his persuasive prose. Whether in short opinion pieces (on death and taxes), or in long essays, speeches, and interviews (covering a range of topics from mushrooms to orangutans), this collection is a fascinating look inside an extraordinary writer’s mind. It includes his remarks at science-fiction and fantasy conventions, his thoughts on the importance of banana daiquiris on book tours, his observations on fan mail, and his belief that an author is obligated to sign anything a fan puts in front of him (especially if it is very sharp). He also writes about the books that shaped his love of language and legends, not to mention his entrance into science-fiction fandom when he attended his first sci-fi convention as a teenager.
Filled with all the humor and humanity that have made his novels so enduringly popular, this collection brings Pratchett out from behind the scenes of Discworld to speak for himself—man and boy, bibliophile and computer geek; a champion of hats, orangutans, and Dignity in Dying.
With a foreword by Pratchett’s close friend and Good Omens coauthor Neil Gaiman to lead off, A Slip of the Keyboard is a must-have for any Pratchett fan.

Praise For A Slip of the Keyboard: Collected Nonfiction…

“One of the world’s most delightful writers.”
—Cory Doctorow, Boing Boing

“Some writers simply possess the Gift. No matter what they bring out . . . it’s sure to be compulsively readable. That’s certainly the case with Terry Pratchett.”
—Michael Dirda, The Washington Post Book World

“The great Terry Pratchett, whose wit is metaphysical, who creates an energetic and lively secondary world, who has a multifarious genius for strong parody . . . who deals with death with startling originality. He writes amazing sentences.”
—A. S. Byatt, The New York Times

“One of the most consistently funny writers around; a master of the stealth simile, the time-delay pun, and the deflationary three-part list.”
—Ben Aaronovitch, The Guardian (London)

“What Pratchett does is not just great, but unparalleled. In five hundred years, it won’t be the Nobel laureates who are being studied. It’s going to be this guy.”
—Brandon Sanderson, Tor.com

TERRY PRATCHETT is the acclaimed creator of the global bestselling Discworld series, the first of which, The Colour of Magic, was published in 1983. In all, he is the author of over fifty bestselling books. His novels have been widely adapted for stage and screen, and he is the winner of multiple prizes, including the Carnegie Medal, as well as being awarded a knighthood for services to literature. Worldwide sales of his books now stand at over 75 million, and they have been translated into thirty-seven languages.
Loading...
or
Not Currently Available for Direct Purchase