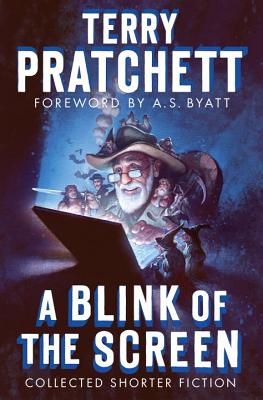 A Blink of the Screen

A collection of short fiction from Terry Pratchett, spanning the whole of his writing career from schooldays to Discworld and the present day.

In the four decades since his first book appeared in print, Terry Pratchett has become one of the world's best-selling and best-loved authors. Here for the first time are his short stories and other short-form fiction collected into one volume. A Blink of the Screen charts the course of Pratchett's long writing career: from his schooldays through to his first writing job on the Bucks Free Press, and the origins of his debut novel, The Carpet People; and on again to the dizzy mastery of the phenomenally successful Discworld series.
Here are characters both familiar and yet to be discovered; abandoned worlds and others still expanding; adventure, chickens, death, disco and, actually, some quite disturbing ideas about Christmas, all of it shot through with Terry's inimitable brand of humour. With an introduction by Booker Prize-winning author A.S. Byatt, illustrations by the late Josh Kirby and drawings by the author himself, this is a book to treasure.

TERRY PRATCHETT is the acclaimed creator of the global bestselling Discworld series, the first of which, The Color of Magic, was published in 1983. In all, he was the author of fifty bestselling books. His novels have been widely adapted for stage and screen and he was the winner of multiple prizes, including the Carnegie Medal, as well as being awarded a knighthood for services to literature. Worldwide sales of his books now stand at 70 million, and they have been translated into thirty-seven languages. He died in 2015.
Loading...
or
Not Currently Available for Direct Purchase