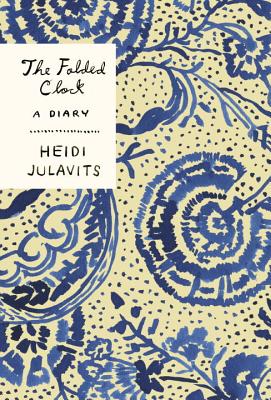 Like many young people, Heidi Julavits kept a diary. Decades later she found her old diaries in a storage bin, and hoped to discover the early evidence of the person (and writer) she'd since become. Instead, "The actual diaries revealed me to possess the mind of a paranoid tax auditor."
Thus was born a desire to try again, to chronicle her daily life as a fortysomething woman, wife, mother, and writer. The dazzling result is The Folded Clock, in which the diary form becomes a meditation on time and self, youth and aging, betrayal and loyalty, friendship and romance, faith and fate, marriage and family, desire and death, gossip and secrets, art and ambition.
The Folded Clock is as playful as it is brilliant, a tour de force by one of the most gifted prose stylists in American letters.

Heidi Julavits is the author of four critically acclaimed novels (The Vanishers, The Uses of Enchantment, The Effect of Living Backwards, and The Mineral Palace) and co-editor, with Sheila Heti and Leanne Shapton, of the New York Times bestseller Women in Clothes. Her fiction has appeared in Harper's Magazine, McSweeney's, and The Best American Short Stories, among other places. She's a founding editor of The Believer magazine and the recipient of a Guggenheim Fellowship. She lives in Manhattan, where she teaches at Columbia University. She was born and raised in Portland, Maine.
Loading...
or
Not Currently Available for Direct Purchase