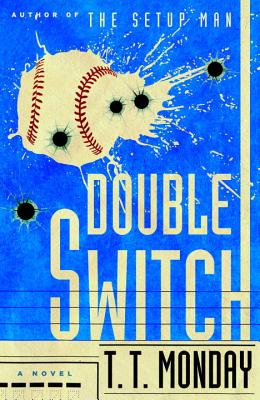 “Monday’s Double Switch is a rocket ride of a sports mystery with a wicked curve ball on every smoothly written page. May Johnny Adcock’s careers as a relief pitcher and sleuth motor on for a very long time."--David Baldacci, #1 New York Times bestselling author

Johnny Adcock, the aging major-league relief pitcher who moonlights as a private investigator, returns in the thrilling follow-up to The Setup Man.
Johnny Adcock doesn’t have an office; he has the bullpen. That’s where he’s sitting shelling sunflower seeds after a game, when up walks Tiff Tate, the enigmatic, career-making PR/stylist behind the most highly marketable looks in baseball. Tiff needs Adcock’s special brand of expertise. Her new client is Yonel Ruiz, the rookie phenom who courageously risked life and limb in shark-infested waters to flee his native Cuba for fame, fortune, and freedom in Major League Baseball. Now that Ruiz has signed a record-setting contract, the Venezuelan cartel that smuggled him out is squeezing him for a bigger slice of the action and they’ve unleashed a ruthless assassin, known only as La Loba, to collect. Adcock takes the case, even though the front office wants to shut down his side job and has sent its no-nonsense corporate fixer and “director of security” to keep a close eye on him. Adcock is immediately swept up in a high-pressure game full of surprising twists, double crosses, and deadly gambits that will leave him fighting for his life and in danger of losing more than the heat off his fastball or a spot in the playoffs.
Critics raved about The Setup Man: “A sexy mystery with a rakish lead” (Milwaukee Journal Sentinel), “This rookie thriller writer has homered his first time at bat” (The Free Lance-Star), and “Teems with sex, violence—and baseball . . . Monday deserves promotion to the starting rotation of thriller writers” (St. Louis Post-Dispatch). Double Switch proves that Johnny Adcock is one of the genre’s most entertaining detectives in years, and gives readers a welcome return to the sexy,
action-packed, and thrilling world where high-stakes professional sports and life-or-death action collide.

Praise For Double Switch: A Novel…

“Monday’s Double Switch is a rocket ride of a sports mystery with a wicked curve ball on every smoothly written page. May Johnny Adcock’s careers as a relief pitcher and sleuth motor on for a very long time."
--David Baldacci, #1 New York Times bestselling author of The Guilty

"Rollicking good fun for anyone who loves baseball and mysteries, T.T. Monday takes you inside a modern-day baseball clubhouse and imagines a world in which a left-handed bullpen specialist moonlights as a real-world fixer."
--Molly Knight, New York Times bestselling author of The Best Team Money Can Buy

"Double Switch is a fast-paced, crisply written mystery novel...that balances baseball against underworld vices like sex, drugs, violence, human trafficking — and oh yeah, several dead bodies....Monday’s prose is witty and sharp, and he packs a lot into the plot, which moves briskly to a tidy conclusion."
--The Tampa Tribune

"Monday is at ease in moving among crime, baseball, and romance. The book gains authenticity from its references to real-life figures and situations. And the first-person narrator makes for good company. Monday's second effort, following The Setup Man (2014), is an enjoyable, easygoing sequel that shows off the author's skill at seamlessly mixing genres."
--Kirkus

"Monday (a pseudonym for novelist Nick Taylor) knows his baseball well, creates a mystery out of the very real exploitation of Cuban baseball defectors, and hasan ear for dialogue. Good enough that readers who missed the first Adcock mystery (The Setup Man, 2014) will be eager to catch up."
--Booklist

"Monday handles the baseball action flawlessly with this timely look at the influx of Cuban ballplayers and those eager to take advantage of them."
--Publishers Weekly

T. T. MONDAY is the pseudonym of novelist Nick Taylor, author of The Disagreement and Father Junípero’s Confessor. Double Switch is his second novel to feature Johnny Adcock, following The Setup Man.
Loading...
or
Not Currently Available for Direct Purchase