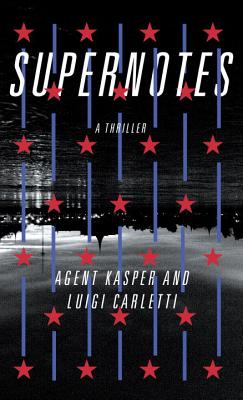 In the Cambodian hinterlands, a lone Western prisoner suffers through a hot, muddy, interminable sentence. Wasted by repeated torture, lack of sleep, malnutrition, and psychotropic drugs, he has been abandoned. His years of exemplary service to his government mean nothing. No one is coming for him.

This is Agent Kasper, a man with a staggering résumé: commercial airline pilot, firearms expert, highly accomplished practitioner of several of the martial arts, a secret agent par excellence. It is this incredible competence that will be his undoing. While investigating Mafia money laundering in Phnom Penh, Kasper is approached by the CIA to track down the source of the so-called supernotes—illegal U.S. banknotes counterfeited so perfectly that they are undetectable, even by sophisticated machines—that are flooding Southeast Asia. With patience, skill, and courage, Kasper uncovers the explosive secret behind them and is badly burned by the truth.

Meanwhile, back in Rome, a sharp, scrappy lawyer named Barbara Belli has been hired by Kasper’s family to work for his release. She has contacts in the foreign ministry, and while officials make sweeping claims about moving heaven and earth, nothing happens. It’s more than just creaking bureaucracy. Kasper has really pissed off the wrong people.

Based on true events in the life of a former spy, Kasper’s journey makes for a shocking and spellbinding page-turner of petty corruption, high-level betrayal, and state secrets so powerful that governments will protect them by any means.

AGENT KASPER is a former operative for both the Italian intelligence services and the American CIA. LUIGI CARLETTI is a prize-winning veteran investigative journalist and the author of several novels. Translated by John Cullen.


Praise For Supernotes: A Thriller…

"A fast, exciting read inspired by a real agent who risked his life combatting the problem of counterfeiting on an international scale."
—Kirkus Reviews

"The main appeal here is the tantalizing premise."
—Booklist
or
Not Currently Available for Direct Purchase
Copyright © 2020 American Booksellers Association