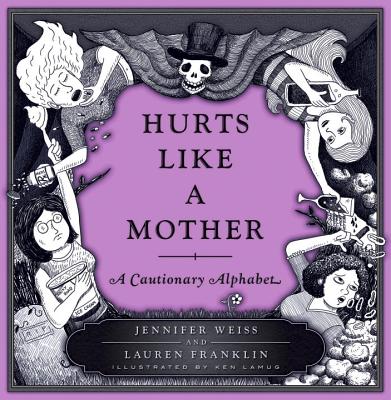 At last—the book that truly feels your pain...
Whether you’ve had a kid for decades or a few minutes, you know it can hurt— physically, emotionally, and, let’s just say it: like a motherf*&^%! In the vein of Go The F*ck To Sleep, this grown-up picture book parody of Edward Gorey’s classic The Gashlycrumb Tinies takes you on an A-Z journey through the perils of modern parenting as twenty-six moms succumb to hilarious and horrific child-care related fates. Hurts Like a Mother will make you laugh so you don’t cry (or die).

The perfect gift to make the mom in your life laugh!

Praise For Hurts Like a Mother: A Cautionary Alphabet…

"Jennifer Weiss and Lauren Franklin celebrate our transgressions in their new book... No matter what stage of motherhood you are surviving at the moment, Weiss and Franklin commiserate with you down memory lane or give you something to look forward to. Something that will be much funnier in retrospect." --Fredericksburg.com

"Hurts Like A Mother is a brief but humorously morbid book. Harkening to the gothic Victorian mood from Gorey's original illustrations and poems, the stark black-and-white drawings comically depict modern parenting crises, particularly when portraying the faces of the harried mothers which range from fatigued to intoxicated to homicidal."
--BoingBoing.com

Jennifer Weiss consults for non-profits on public health policy, advocacy and education and is the co-author of Brooklyn By Name: How the Neighborhoods, Streets, Parks, Bridges and More Got Their Names” and “Citizen-in Chief: The Second Lives of the American Presidents.  She lives in Brooklyn, NY with her husband and two children.

Lauren Franklin lives in Washington DC with her husband and two children.

Weiss and Franklin have been sharing dark humor for over 25 years.  Beyond their writing collaboration, they co-founded babyPolitico, a children’s clothing company.

Illustrator Kenneth Kit Lamug works on both comic and picture books in addition to being a filmmaker and photographer. He has won the Moonbeam Children's Book Award, National Indie Excellence Award, Literary Classics, and Pinnacle Award for his illustrations.