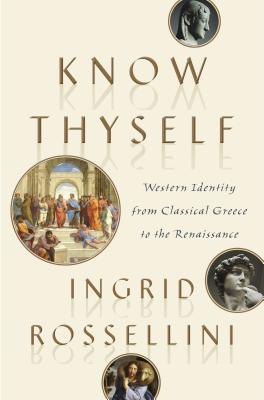 Western Identity from Classical Greece to the Renaissance

A Kirkus Reviews Best Book of 2018

A lively and timely introduction to the roots of self-understanding--who we are and how we should act--in the cultures of ancient Greece, the Roman Empire, and Middle Ages and the Renaissance

"Know thyself"--this fundamental imperative appeared for the first time in ancient Greece, specifically in Delphi, the temple of the god Apollo, who represented the enlightened power of reason. For the Greeks, self-knowledge and identity were the basics of their civilization and their sources were to be found in where one was born and into which social group. These determined who you were and what your duties were. In this book the independent scholar Ingrid Rossellini surveys the major ideas that, from Greek and Roman antiquity through the Christian medieval era up to the dawn of modernity in the Renaissance, have guided the Western project of self-knowledge. Addressing the curious lay reader with an interdisciplinary approach that includes numerous references to the visual arts, Know Thyself will reintroduce readers to the most profound and enduring ways our civilization has framed the issues of self and society, in the process helping us rediscover the very building blocks of our personality.

Praise For Know Thyself: Western Identity from Classical Greece to the Renaissance…

"Rumors of the death of Western civilization must be questioned when a work of popular history as absorbing and readable as this is published...New Western civ classes could ask for no better overview."
—Booklist, starred review

“In a thrilling story of pride and humility from the Greeks to the Renaissance, Know Thyself offers an entire education in a book. Ingrid Rossellini shows us where we have come from and who we need to be as citizens in a diverse and ever-changing world.”
—Barry Strauss, Bryce and Edith M. Bowmar Professor in Humanistic Studies at Cornell University and author of The Death of Caesar: The Story of History’s Most Famous Assassination

“Polymath Rossellini shares the fruits of her broad knowledge of literature, philosophy, art, and history in this…highly rewarding work…a highly satisfying journey across centuries of culture...Rossellini gives us illuminating classes in art history, Western civilization, philosophy, and religion, all rolled into one book that must be read closely and pondered fully.”
—Kirkus, starred review


“Scholar Rossellini’s grand study, in many ways, presents a history of the Western soul…Rossellini is skilled in teasing out the metaphysical and cultural hinges that shaped the Western mind…a scholarly yet accessible tour through the history of Western civilization, pleasantly detailing the rises, declines, rediscoveries, and revolutions along the way.”
—Library Journal

INGRID ROSSELLINI was born in Rome and educated there, and later received a BA, master's, and Ph.D. in Italian Literature from Columbia, writing her dissertation on Petrarch. She has taught literature and Italian film at Columbia, NYU, Harvard, Princeton, and other universities. She is the daughter of the actress Ingrid Bergman and the director Roberto Rossellini; Isabella Rossellini is her sister. She lives in New York City with her husband and two children.
Loading...
or
Not Currently Available for Direct Purchase