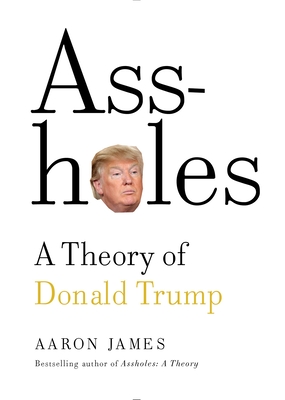 A Theory of Donald Trump

Make America Great Again? Donald Trump is an asshole is a fact widely agreed upon—even by his supporters, who actually like that about him. But his startling political rise makes the question of just what sort of asshole he is, and how his assholedom may help to explain his success, one not just of philosophical interest but of almost existential urgency.
Enter the philosopher Aaron James, author of the foundational text in the burgeoning field of Asshole Studies: the bestselling Assholes: A Theory. In this brisk and trenchant inquiry into the phenomenon that is Donald Trump, James places the man firmly in the typology of the asshole (takes every advantage, entrenched sense of entitlement, immune to criticism); considers whether, in the Hobbesian world we seem to inhabit, he might not somehow be a force for good—i.e., the Stronger Asshole; and offers a suggestion for how the bonds of our social contract, spectacularly broken by Trump’s (and Ted Cruz’s) disdain for democratic civility, might in time be repaired.
You will never think about Donald Trump and his Art of the Deal the same way after reading this book. And, like it or not, think about him we must.

AARON JAMES holds a PhD from Harvard and is professor and chair of philosophy at the University of California, Irvine. He is the author of Assholes: A Theory and Fairness in Practice: A Social Contract for a Global Economy, and he was awarded a Burkhardt Fellowship from the American Council of Learned Societies and spent the 2009–10 academic year at the Center for Advanced Study in the Behavioral Sciences at Stanford University. He was a visiting professor in the Department of Philosophy at New York University in 2013.
or
Buy Here
Copyright © 2020 American Booksellers Association