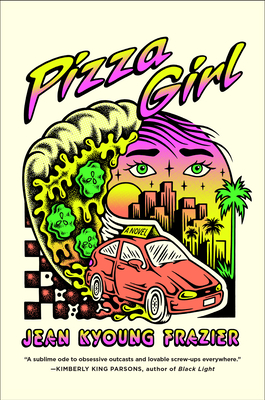 In the tradition of audacious and wryly funny novels like The Idiot and Convenience Store Woman comes the wildly original coming-of-age story of a pregnant pizza delivery girl who becomes obsessed with one of her customers.

Eighteen years old, pregnant, and working as a pizza delivery girl in suburban Los Angeles, our charmingly dysfunctional heroine is deeply lost and in complete denial about it all. She's grieving the death of her father (whom she has more in common with than she'd like to admit), avoiding her supportive mom and loving boyfriend, and flagrantly ignoring her future.

Her world is further upended when she becomes obsessed with Jenny, a stay-at-home mother new to the neighborhood, who comes to depend on weekly deliveries of pickled-covered pizzas for her son's happiness. As one woman looks toward motherhood and the other toward middle age, the relationship between the two begins to blur in strange, complicated, and ultimately heartbreaking ways.

Bold, tender, propulsive, and unexpected in countless ways, Jean Kyoung Frazier's Pizza Girl is a moving and funny portrait of a flawed, unforgettable young woman as she tries to find her place in the world.

JEAN KYOUNG FRAZIER attended USC and received her MFA in fiction from Columbia University. Pizza Girl is her debut novel.

Praise For Pizza Girl: A Novel…

"Sharp and surprising, Pizza Girl shows us how obsession can fill the empty spaces in a young woman's life. Jean Kyoung Frazier will make you laugh with one sentence and break your heart with the next. A delicious debut."
—Julia Phillips, author of Disappearing Earth

"In fearless, propulsive prose, Jean Kyoung Frazier perfectly captures the listless ache of a grieving, aimless teen on the cusp of terrifying responsibility. A sublime ode to obsessive outcasts and lovable screw-ups everywhere, Pizza Girl is irresistible and bold, brutal and sweet, with an ending that will thrash your heart."
—Kimberly King Parsons, author of Black Light

"Jean Kyoung Frazier, a blazing new voice in fiction, has given us a sly, poignant glimpse into the wilds of suburbia, where intergenerational queer love and alienation from labor go hand  in hand. And who doesn't want to read about that?"
—Andrea Lawlor, author of Paul Takes the Form of a Mortal Girl

"To Pizza Girl, Jean Kyoung Frazier brings a flawless ear for language, great inventiveness, unfailing intelligence and empathy, and best of all a rare and shimmering wit. This novel has immense appeal."
—Richard Ford

"Pizza Girl is a funny and moving debut, full of wry observation and deep humanity. Jean Kyoung Frazier’s incredibly winning protagonist delivers laughter and grief with all the toppings. A wonderful novel from a new writer with talent and heart."
—Sam Lipsyte, author of Hark