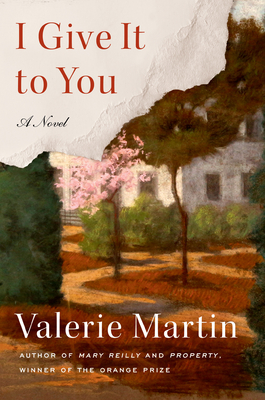 I Give It to You

A timeless story of family, war, art, and betrayal set around an ancient, ancestral home in the Tuscan countryside from bestselling novelist Valerie Martin.

When Jan Vidor, an American writer and academic, rents an apartment in a Tuscan villa for the summer, she plans to spend her break working on a novel about Mussolini. Instead, she finds herself captivated by her aristocratic landlady, the elegant, acerbic Beatrice Salviati Bartolo Doyle, whose family has owned Villa Chiara for generations. Jan is intrigued by Beatrice’s stories of World War II, particularly by the tragic fate of her uncle Sandro, who was mysteriously murdered in the driveway of the villa at the conclusion of the war. Day by day, Beatrice makes Jan privy to her family history.

As years go by and the friendship is sustained by infrequent meetings, Jan finds she can’t resist writing Beatrice’s story. But as she works on the novel, it becomes clear that the villa itself is at risk and that Beatrice is incapable of saving it. Jan understands that she is telling the story of a catastrophe her friend might prefer to conceal. She presses on.

Praise For I Give It to You: A Novel…

“A novel of philosophical and creative inquiry, cleverly plotted and packed with great characters.”
--The Guardian

“The stories at the heart of Valerie Martin’s latest novel, I Give It to You, are freely, but not always innocently, shared. And what Martin’s narrator does with them raises prickly questions of ownership, artistic license and ethical responsibility.”
--The New York Times Book Review

“Martin’s prose, while effortlessly readable, can take deliciously unexpected turns . . . As enticing as the Salviati family’s history is, it’s the sense of a game being played on multiple levels that lends I Give It to You its deepest powers of seduction.”
--The Seattle Times

"Yes, the narrator of Martin’s new novel is a middle-aged American woman vacationing in Tuscany, but this prickly, uncomfortably relevant dive into personal and societal ethics is no escapist romance . . . Martin parses personal and social politics with methodical care and a reserved tone reminiscent of Edith Wharton.”
--Kirkus, starred review

"An Italian villa and the family that owns it capture the imagination of an American writer in Martin’s intimate, disquieting latest . . . Martin’s engrossing tale explores relationships among family members and workers over four generations . . . Martin’s masterly descriptions of the villa and its gardens are transportive. Evoking the charms and complexities of 20th-century Italy, Martin offers a thought-provoking reflection on writing, friendship, family, and betrayal.”
--Publishers Weekly

"Valerie Martin has always been a consummate storyteller, but in her new novel she tackles the question of where do a writer’s stories come from. And to whom does a story belong? The person it happened to or the one who tells it. In some ways all writers betray their subjects, and Valerie Martin digs into the heart of that betrayal. Reminiscent of Rachel Cusk’s Outline Martin masterfully gives voice to those who have been silenced, whose stories would be lost were it not for a writer to retell it."
--Mary Morris, author of Gateway to the Moon

“She always produces something unexpected and revelatory.”
--Jane Smiley, author of Golden Age

Praise for Ghost of the Mary Celeste:

"A writer of immense talent and insight."
--Yann Martel, author of The Life of Pi

Praise for Confessions of Edward Day:

Valerie Martin is the author of ten novels, including The Ghost of the Mary Celeste, The Confessions of Edward Day, Trespass, Mary Reilly, Italian Fever, and Property; three collections of short fiction; and a biography of Saint Francis of Assisi, titled Salvation. She has been awarded grants from the National Endowment for the Arts and the John Simon Guggenheim Fellowship, as well as the Kafka Prize (for Mary Reilly) and Britain’s Women’s Prize (for Property).
Loading...
or
Not Currently Available for Direct Purchase