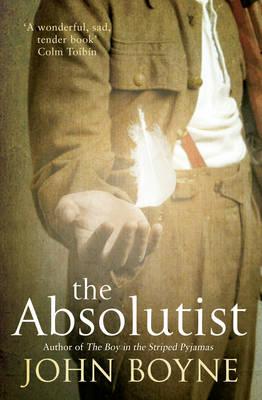 It is September 1919: twenty-one-year-old Tristan Sadler takes a train from London to Norwich to deliver a package of letters to the sister of Will Bancroft, the man he fought alongside during the Great War.
But the letters are not the real reason for Tristan's visit. He can no longer keep a secret and has finally found the courage to unburden himself of it. As Tristan recounts the horrific details of what to him became a senseless war, he also speaks of his friendship with Will--from their first meeting on the training grounds at Aldershot to their farewell in the trenches of northern France. The intensity of their bond brought Tristan happiness and self-discovery as well as confusion and unbearable pain.
"The Absolutist" is a masterful tale of passion, jealousy, heroism, and betrayal set in one of the most gruesome trenches of France during World War I. This novel will keep readers on the edge of their seats until its most extraordinary and unexpected conclusion, and will stay with them long after they've turned the last page.

Praise for "The Absolutist"
"Extraordinary...The narrative is by turns surprising and tragic in equal measure while its troubling conclusion will stay with readers long after they've closed the book." --Carlo Gebler
"Powerful, poignant and beautifully written. This will become a classic war novel." --"The Bookseller"
"John Boyne brings a completely fresh eye to the most important stories. He is one of the great craftsmen in contemporary literature." --Colum McCann
"A wonderful, sad, tender book that is going to have an enormous impact on everyone who reads it." --Colm Toibin
"Political, personal, powerful...a fiercely interrogative novel that asks not just what it means to be a man but also what it means to be a human being in the extreme circumstances of war." --"Irish Times"
"(In) Boyne's fiction, there's a sense that people are fundamentally the sum of their traumas...Boyne's narrative grip is strong." --"Literary Review"

John Boyne was born in Dublin, Ireland in 1971. He is the author of nine novels (seven for adults and two for children), including "The Boy in the Striped Pajamas, "which was made into an award-winning film. The novel also won two Irish Book Awards, was short-listed for the British Book Award, reached the top of the "New York Times "Best Sellers list, and has sold more than five million copies. His novels are published in forty-five languages. He lives in Dublin. Please visit him at www.johnboyne.com
Loading...
or
Not Currently Available for Direct Purchase