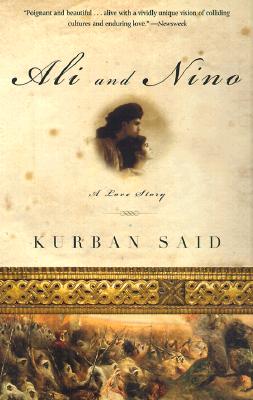 First published in Vienna in 1937, this classic story of romance and adventure has been compared to Dr. Zhivago and Romeo and Juliet.  Its mysterious author was recently the subject of a feature article in the New Yorker, which has inspired a forthcoming biography. Out of print for nearly three decades until the hardcover re-release last year, Ali and Nino is Kurban Said's masterpiece. It is a captivating novel as evocative of the exotic desert landscape as it is of the passion between two people pulled apart by culture, religion, and war.

It is the eve of World War I in Baku, Azerbaijan, a city on the edge of the Caspian Sea, poised precariously between east and west.  Ali Khan Shirvanshir, a Muslim schoolboy from a proud, aristocratic family, has fallen in love with the beautiful and enigmatic Nino Kipiani, a Christian girl with distinctly European sensibilities.   To be together they must overcome blood feud and scandal, attempt a daring horseback rescue, and travel from the bustling street of oil-boom Baku, through starkly beautiful deserts and remote mountain villages, to the opulent palace of Ali's uncle in neighboring Persia.  Ultimately the lovers are drawn back to Baku, but when war threatens their future, Ali is forced to choose between his loyalty to the beliefs of his Asian ancestors and his profound devotion to Nino.  Combining the exotic fascination of a tale told by Scheherazade with the range and magnificence of an epic, Ali and Nino is a timeless classic of love in the face of war.

Kurban Said was the pseudonym of Lev Nussimbaum, who grew up in Baku and died in Italy in 1942.

Praise For Ali and Nino: A Love Story…

"Poignant and beautiful...alive with a vividly unique vision of colliding cultures and enduring love."--Newsweek

"One feels as if one had dug up buried treasure--. An epic of cultural change that seems more immediate than this morning's headlines."--The New York Times

"The brilliant sunset light [Ali and Nino] sheds on a millennial civilization is like living history; the alien yet immensely human characters draw one into their world with vivid conviction. The rescue of this novel is certainly an important literary event."--Mary Renault

"An emotional magic carpet...Rich, exciting, and brightly amusing as well as sorrowful along the way, page after iridescent page."-The Plain Dealer

"A wonderful book. Ali and Nino is the best love story I have ever read, and one of the best adventures." -Michael Feld, The Globe & Mail