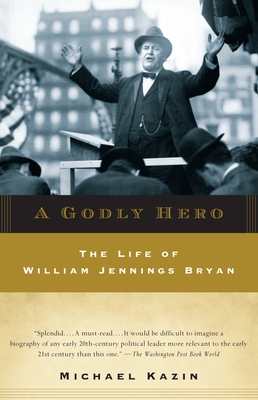 The Life of William Jennings Bryan

ONE OF THE BEST BOOKS OF THE YEAR: THE WASHINGTON POST, CHICAGO TRIBUNE, LOS ANGELES TIMES, ST. LOUIS POST-DISPATCH.

Politician, evangelist, and reformer William Jennings Bryan was the most popular public speaker of his time. In this acclaimed biography—the first major reconsideration of Bryan’s life in forty years–award-winning historian Michael Kazin illuminates his astonishing career and the richly diverse and volatile landscape of religion and politics in which he rose to fame.

Kazin vividly re-creates Bryan’s tremendous appeal, showing how he won a passionate following among both rural and urban Americans, who saw in him not only the practical vision of a reform politician but also the righteousness of a pastor. Bryan did more than anyone to transform the Democratic Party from a bulwark of laissez-faire to the citadel of liberalism we identify with Franklin D. Roosevelt. In 1896, 1900, and 1908, Bryan was nominated for president, and though he fell short each time, his legacy–a subject of great debate after his death–remains monumental. This nuanced and brilliantly crafted portrait restores Bryan to an esteemed place in American history.


Praise For A Godly Hero: The Life of William Jennings Bryan…

“Splendid. . . . A must-read. . . . It would be difficult to imagine a biography of any early 20th-century political leader more relevant to the early 21st century than this one.”
—The Washington Post Book World

“Instructive, illuminating–engagingly written. . . . Bryan emerges from Kazin's new biography as the founding father of the modern Democratic Party and maybe even of modern American politics.”
—The Boston Globe

MICHAEL KAZIN is professor of history at Georgetown University. The author of three previous books about American history--America Divided, The Populist Persuasion, and Barons of Labor-he is a frequent contributor to The New York Times, The Washington Post, The Nation, and The American Prospect and the recipient of fellowships from the Guggenheim Foundation, the National Endowment for the Humanities, the Woodrow Wilson Center, and the Fulbright Scholar Program. He lives in Chevy Chase, Maryland.
Loading...
or support indie stores by buying on