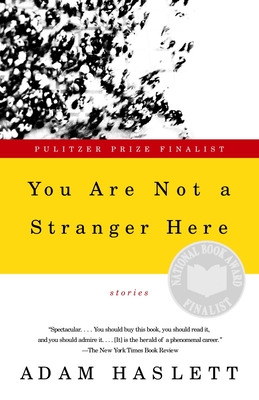 You Are Not a Stranger Here

In these unforgettable stories, the acclaimed author of Imagine Me Gone explores lives that appear shuttered by loss and discovers entire worlds hidden inside them. The impact is at once harrowing and thrilling.

An elderly inventor, burning with manic creativity, tries to reconcile with his estranged gay son. A bereaved boy draws a thuggish classmate into a relationship of escalating guilt and violence. A genteel middle-aged woman, a long-time resident of a psychiatric hospital, becomes the confidante of a lovelorn teenaged volunteer. Told with Chekhovian restraint and compassion, and conveying both the sorrow of life and the courage with which people rise to meet it, You Are Not a Stranger Here is a triumph of storytelling.

Praise For You Are Not a Stranger Here: Stories…

“Spectacular. . . . You should buy this book, you should read it, and you should admire it. . . . [It] is the herald of a phenomenal career.” —The New York Times Book Review

“Extraordinary. . . . Frighteningly tender. . . . Displays an order as natural as a tree branch in winter—lithe and achingly austere.” —The Boston Globe

“Haslett possesses a rich assortment of literary gifts: an instinctive empathy for his characters and an ability to map their inner lives in startling detail; a knack for graceful, evocative prose; and a determination to trace the hidden arithmetic of relationships.” —The New York Times

“Fascinating. . . . Haslett is an eloquent, precise miniaturist.” —The New Yorker

Adam Haslett is the author of the novel Imagine Me Gone; the short story collection You Are Not A Stranger Here, which was a Pulitzer Prize and National Book Award finalist and which won the PEN/Winship Award; and the novel Union Atlantic, which won the Lambda Literary Award and was shortlisted for the Commonwealth Prize. His books have been translated into eighteen languages, and he has received the Berlin Prize from the American Academy in Berlin, the PEN/Malamud Award, and fellowships from the Guggenheim and Rockefeller Foundations. He lives in New York City.
Loading...
or support indie stores by buying on
(This book is on backorder)