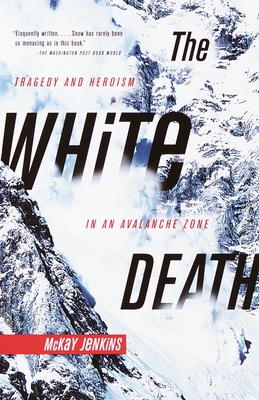 Tragedy and Heroism in an Avalanche Zone

In 1969, five young men from Montana set out to accomplish what no one had before: to scale the sheer north face of Mt. Cleveland, Glacier National Park's tallest mountain, in winter. Two days later tragedy struck: they were buried in an avalanche so deep that their bodies would not be discovered until the following June. The White Death is the riveting account of that fated climb and of the breathtakingly heroic rescue attempt that ensued.
In the spirit of Peter Matthiessen and John McPhee, McKay Jenkins interweaves a harrowing narrative with an astonishing expanse of relevant knowledge ranging from the history of mountain climbing to the science of snow. Evocative and moving, this fascinating book is a humbling account of man at his most intrepid and nature at its most indomitable.

Praise For The White Death: Tragedy and Heroism in an Avalanche Zone…

“[E]loquently written…. Snow has rarely been so menacing as in this book.”–The Washington Post Book World

McKay Jenkins has backpacked, paddled, bicycled, and skied in wilderness all over the world. He has written for Outside, Outdoor Explorer, and Orion, among many other publications. He has a master's degree in journalism from Columbia and a Ph.D. in English from Princeton. A former staff writer for The Atlanta Constitution, he currently teaches literature and nonfiction writing at the University of Delaware. Jenkins lives in Philadelphia with his wife and two dogs.
or
Not Currently Available for Direct Purchase