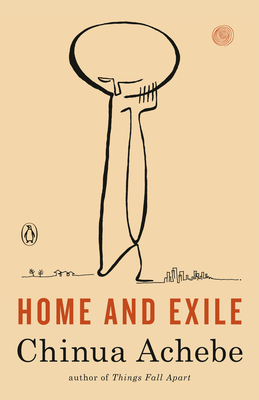 "A rare opportunity to glimpse a bit of the man behind the monumental novels." --Chicago Tribune

Powerful and deeply personal, these three essays by the great Nigerian author articulate his mission to rescue African culture from the narratives written by Europeans. Looking through the prism of his experiences as a student in English schools in Nigeria, he recalls his first encounters with European perspectives on Africa in the works of Joyce Cary and Elspeth Huxley. He examines the impact that his novel Things Fall Apart—as well as fellow Nigerian Amos Tutola’s The Palm-Wine Drinkard and Jomo Kenyatta’s Facing Mt. Kenya, among other works—had on efforts to reclaim Africa's story. He confronts the persistence of colonial views of Africa. And he argues for the importance of living and writing the African experience: Africa needs stories told by Africans.

Praise For Home and Exile…

"Spare and moving... The many admirers of Achebe's fiction will find here a rare opportunity to glimpse a bit of the man behind the monumental novels."
--Chicago Tribune

"Soulful... A book that anyone concerned with advancing social justice and human dignity should read.
--The Seattle Times

Chinua Achebe (1930–2013) was born in Nigeria. Widely considered to be the father of modern African literature, he is best known for his masterful African Trilogy, consisting of Things Fall Apart, Arrow of God, and No Longer at Ease. The trilogy tells the story of a single Nigerian community over three generations from first colonial contact to urban migration and the breakdown of traditional cultures. He is also the author of Anthills of the Savannah, A Man of the People, Girls at War and Other Stories, Home and Exile, Hopes and Impediments, Collected Poems, The Education of a British-Protected Child, Chike and the River, and There Was a Country. He was the David and Marianna Fisher University Professor and Professor of Africana Studies at Brown University and, for more than fifteen years, was the Charles P. Stevenson Jr. Professor of Languages and Literature at Bard College. Achebe was the recipient of the Nigerian National Merit Award, Nigeria’s highest award for intellectual achievement. In 2007, Achebe was awarded the Man Booker International Prize for lifetime achievement.
Loading...
or
Not Currently Available for Direct Purchase