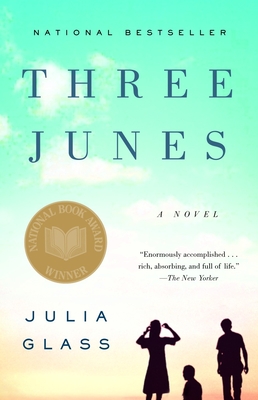 NATIONAL BOOK AWARD WINNER • NATIONAL BESTSELLER • An astonishing novel that traces the lives of a Scottish family over a decade as they confront the joys and longings, fulfillments and betrayals of love in all its guises.

In June of 1989 Paul McLeod, a newspaper publisher and recent widower, travels to Greece, where he falls for a young American artist and reflects on the complicated truth about his marriage....

Six years later, again in June, Paul’s death draws his three grown sons and their families back to their ancestral home. Fenno, the eldest, a wry, introspective gay man, narrates the events of this unforeseen reunion. Far from his straitlaced expatriate life as a bookseller in Greenwich Village, Fenno is stunned by a series of revelations that threaten his carefully crafted defenses....

Four years farther on, in yet another June, a chance meeting on the Long Island shore brings Fenno together with Fern Olitsky, the artist who once captivated his father. Now pregnant, Fern must weigh her guilt about the past against her wishes for the future and decide what family means to her.

“Enormously accomplished….rich, absorbing, and full of life.” -The New Yorker

“Three Junes almost threatens to burst with all the life it contains. Glass’s ability to illuminate and deepen the mysteries of her characters’ lives is extraordinary.” – Michael Cunningham, author of The Hours

“Gorgeous. . .‘Three Junes’ goes after the big issues without a trace of fustiness and gives us a memorable hero.” – Los Angeles Times Book Review

“’Three Junes’ is a novel that bursts with the lives of its characters. They move into our hearts, taking up permanent residence, the newest members of the reader’s family of choice.”–Times-Picayune

“Fiercely realized. . .luxuriant in its emotional comprehension and the idea, or promise, that anything might happen.”–Boston Globe

“The sort of sparkling debut that marks a writer as one to watch.” –Daily News

“The fluid, evolving nature of family history is at the heart of this assured first novel.”–Time Out New York

“Formidable. . . The traditional novel of social relations is very much alive in Three Junes. Virginia Woolf and Elizabeth Bowen, among other exemplars, would surely approve.”–Kirkus Reviews

“Brimming with a marvelous cast of intricate characters set in an assortment of scintillating backdrops, Glass's philosophically introspective novel is highly intelligent and well-written.”–Booklist

Julia Glass is the author of the best-selling Three Junes, winner of the 2002 National Book Award for Fiction; her previous novels include, most recently, And the Dark Sacred Night and The Widower's Tale. A teacher of fiction and a recipient of fellowships from the National Endowment for the Arts, the New York Foundation for the Arts, and the Radcliffe Institute for Advanced Study, Glass lives with her family in Marblehead, Massachusetts.