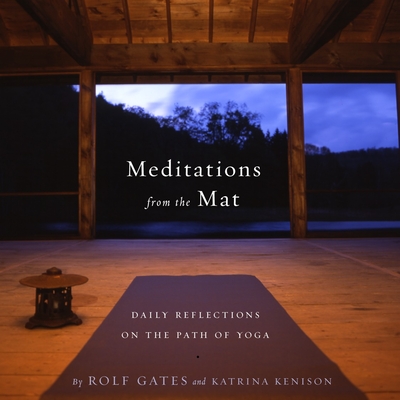 Meditations from the Mat

Daily Reflections on the Path of Yoga

365 daily reflections offering a way to integrate the mindfulness that yoga teaches into everyday life, from the acclaimed yoga teacher, Rolf Gates.

As more and more people in the West pursue yoga in its various forms, whether at traditional centers, in the high-powered atmosphere of sports clubs, or on their own, they begin to realize that far from being just another exercise routine, yoga is a discipline of the body and the mind. Whether used in the morning to set the tone for the day, during yoga exercise itself, or at the end of the day, during evening reflection, the daily reflections in Meditations from the Mat will support and enhance anyone’s yoga journey.

Praise For Meditations from the Mat: Daily Reflections on the Path of Yoga…

“Utterly different. . . . This is a wonderful (and inexpensive) book for people who are unhappy in their lives and are looking for a healthy way to find peace and a sense of coming home, day by day.” —USA Today

“Rolf Gates is an inspiring teacher who has written an inspiring book. A must for yoga teachers and students alike, Meditations from the Mat brings yoga theory into the 21st century and into our daily lives.” —Baron Baptiste, author of Journey Into Power

“In this free-spirited journey to the heart of yoga, Rolf guides us, through daily meditations, to finding the appropriate balance between standing firm and surrendering to flow—the key to peace of mind.” —Beryl Bender Birch, author of Power Yoga and Beyond Power Yoga

Rolf Gates, author of two acclaimed books on yogic philosophy, Meditations from the Mat: Daily Reflections on the Path of Yoga and Meditations on Intention and Being: Daily Reflections on the Path of Yoga, Mindfulness, and Compassion, conducts yoga workshops, retreats, teacher trainings, and coaching and mentorship programs throughout the U.S. and abroad—and online. Rolf and his work have been featured in numerous media, including Yoga Journal, ORGINS, Natural Health, People Magazine, and Travel and Leisure’s 25 Top Yoga Studios in the World. Rolf is the co-founder of the Yoga, Meditation and Recovery Conference at the Esalen Institute in Big Sur, California and the Kripalu Center for Yoga and Health in Lenox, Massachusetts and a teacher at Spirit Rock Insight Meditation Center in Northern California.  He is also on the Advisory Board for the Yoga Service Council and the Veterans Yoga Project.  A former addictions counselor and U.S. Army Airborne Ranger who has practiced meditation for over twenty-five years, Rolf brings his eclectic background to his practice and his teachings.  Rolf and his wife, Mariam Gates, author of Good Night Yoga: A Pose by Pose Bedtime Story, live in Santa Cruz, California with their two children.

Katrina Kenison has been the annual editor of The Best American Short Stories since 1990. In 1999 she was coeditor, with John Updike, of the national best-seller The Best American Short Stories of the Century. She coedited the anthology Mothers: Twenty Stories of Contemporary Motherhood and is the author of Mitten Strings for God: Reflections for Mothers in a Hurry. Her essays and articles have appeared in O, The Oprah Magazine, where she has been a contributing editor, and in Redbook, Ladies’ Home Journal, Family Circle, and Family Life. Kenison lives outside Boston with her husband, Steven Lewers and their two sons. She began practicing yoga with Rolf Gates in 2000.
or support indie stores by buying on