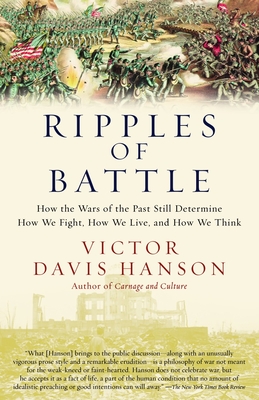 How Wars of the Past Still Determine How We Fight, How We Live, and How We Think

The effects of war refuse to remain local: they persist through the centuries, sometimes in unlikely ways far removed from the military arena. In Ripples of Battle, the acclaimed historian Victor Davis Hanson weaves wide-ranging military and cultural history with his unparalleled gift for battle narrative as he illuminates the centrality of war in the human experience.

The Athenian defeat at Delium in 424 BC brought tactical innovations to infantry fighting; it also assured the influence of the philosophy of Socrates, who fought well in the battle. Nearly twenty-three hundred years later, the carnage at Shiloh and the death of the brilliant Southern strategist Albert Sidney Johnson inspired a sense of fateful tragedy that would endure and stymie Southern culture for decades. The Northern victory would also bolster the reputation of William Tecumseh Sherman, and inspire Lew Wallace to pen the classic Ben Hur. And, perhaps most resonant for our time, the agony of Okinawa spurred the Japanese toward state-sanctioned suicide missions, a tactic so uncompromising and subversive, it haunts our view of non-Western combatants to this day.

Praise For Ripples of Battle: How Wars of the Past Still Determine How We Fight, How We Live, and How We Think…

“What [Hanson] brings to the public discussion–along with an unusually vigorous prose style and a remarkable erudition–is a philosophy of war not meant for the weak—kneed or faint—hearted. Hanson does not celebrate war, but he accepts it as a fact of life, a part of the human condition that no amount of idealistic preaching or good intentions can will away.” –The New York Times Book Review

“Victor Davis Hanson is refreshingly unabashed about being an old-fashioned military historian . . . [and] he displays an exceptional chronological sweep.” --The Washington Post Book World

“What’s most impressive about Hanson’s work is his constant reminder that history is not just a faceless story of economic and social progress, but also one about the strength of individuals, brought to life here in masterly prose.” --The Christian Science Monitor

“His premise is fascinating and well executed. . . . A great little book. . . . Hanson is a superb storyteller and a clear and concise writer.” --The Washington Times

Victor Davis Hanson is the Martin and Illie Anderson Senior Fellow in Residence in Classics and Military History at the Hoover Institution, Stanford University, a professor of Classics Emeritus at California State University, Fresno, and a nationally syndicated columnist for Tribune Media Services. He is also the Wayne & Marcia Buske Distinguished Fellow in History, Hillsdale College, where he teaches each fall semester courses in military history and classical culture. He is the author of The Soul of Battle, An Autumn of War, and Carnage and Culture, all published by Anchor Books. His most recent book is The Savior Generals (Bloomsbury 2013). Hanson was awarded the National Humanities Medal in 2007, the Bradley Prize in 2008, as well as the William F. Buckley Prize (2015), the Claremont Institute’s Statesmanship Award (2006), and the Eric Breindel Award for opinion journalism (2002). He divides his time between his farm in Selma, CA, where he was born in 1953, and the Stanford campus.
Loading...
or support indie stores by buying on