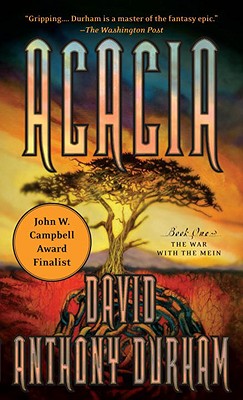 The Acacia Trilogy, Book One

“David Anthony Durham has serious chops. I can’t wait to read whatever he writes next."
—George R. R. Martin

Born into generations of prosperity, the four royal children of the Akaran dynasty know little of the world outside their opulent island paradise. But when an assassin strikes at the heart of their power, their lives are changed forever.

Forced to flee to distant corners and separated against their will, the children must navigate a web of hidden allegiances, ancient magic, foreign invaders, and illicit trade that will challenge their very notion of who they are. As they come to understand their true purpose in life, the fate of the world lies in their hands.


Praise For Acacia: The Acacia Trilogy, Book One…

Praise for David Anthony Durham and The Acacia Trilogy:

“Gripping. . . . From the first pages of Acacia, Durham demonstrates that he is a master of the fantasy epic.”
—The Washington Post Book World

“Transcendent. . . . As fantasy epics go, the ‘Acacia’ trilogy is a direct and worthy descendant of Tolkien.” —Fredericksburg Free Lance-Star

“Something genuinely new. . . . Strong echoes of Homer and Virgil, Tolkien, Norse mythology’s Twilight of the Gods and America’s compromised history as a republic built on slavery fuse into an enthralling, literate and increasingly suspenseful narrative.”
—Kirkus Reviews (starred)

“Extraordinary. . . . One of the best books, fantasy or otherwise . . . in recent memory.”
—Free-Lance Star

David Anthony Durham received the 2009 John W. Campbell Award for Best New Writer of Science Fiction for Acacia and The Other Lands (the first two volumes of the Acacia Trilogy). Author of the historical novels Gabriel’s Story, Walk Through Darkness, and Pride of Carthage, he was handpicked by George R. R. Martin to write for his Wild Cards series of collaborative novels.