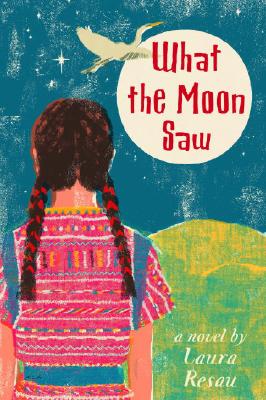 What the Moon Saw

Clara Luna's name means "clear moon" in Spanish. But lately, her head
has felt anything but clear. One day a letter comes from Mexico, written in Spanish: Dear Clara, We invite you to our house for the summer. We will wait for you on the day of the full moon, in June, at the Oaxaca airport. Love, your grandparents.

Fourteen-year-old Clara has never met her father's parents. She knows he snuck over the border from Mexico as a teenager, but beyond that, she knows almost nothing about his childhood. When she agrees to go, she's stunned by her grandparents' life: they live in simple shacks in the mountains of southern Mexico, where most people speak not only Spanish, but an indigenous language, Mixteco.

The village of Yucuyoo holds other surprises, too-- like the spirit waterfall, which is heard but never seen. And Pedro, an intriguing young goatherder who wants to help Clara find the waterfall. Hearing her grandmother’s adventurous tales of growing up as a healer awakens Clara to the magic in Yucuyoo, and in her own soul. What The Moon Saw is an enchanting story of discovering your true self in the most unexpected place.


Praise For What the Moon Saw…

“Filled with evocative language that is rich in imagery and nuance and speaks to the connections that bind us all. Add a thrilling adventure and all the makings of an enticing read are here.”–Kirkus Reviews, Starred

“Readers . . . will find themselves swept up in this powerful, magical story, and they’ll feel, along with Clara, ‘the spiderweb’s threads, connecting me to people miles and years away’.”–Booklist, Starred

"What The Moon Saw "is Laura Resau's first novel. The author lives in Colorado.
Loading...
or
Not Currently Available for Direct Purchase