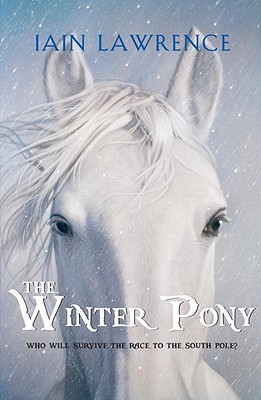 In the forests of Siberia, in the first years of the 20th century, a white pony runs free with his herd. But his life changes forever when he's captured by men. Years of hard work and cruelty wear him out. When he's chosen to be one of 20 ponies to accompany the Englishman Robert Falcon Scott on his quest to become the first to reach the South Pole, he doesn't know what to expect. But the men of Scott's expedition show him kindness, something he's never known before. They also give him a name—James Pigg. As Scott's team hunkers down in Antarctica, James Pigg finds himself caught up in one of the greatest races of all time. The Norwegian explorer Roald Amundsen has suddenly announced that he too means to be first to the Pole. But only one team can triumph, and not everyone can survive—not even the animals.

IAIN LAWRENCE's previous novels include "The Giant-Slayer, The Seance, Gemini Summer, B for Buster, Lord of the Nutcracker Men, Ghost Boy, The Lightkeeper's Daughter, " as well as the Curse of the Jolly Stone trilogy: "The Convicts, The Cannibals, " and "The Castaways"; and the High Seas trilogy: "The Wreckers, The Smugglers, " and "The Buccaneers."
or
Not Currently Available for Direct Purchase
Copyright © 2020 American Booksellers Association