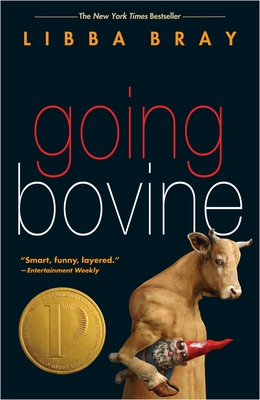 From the author of the Gemma Doyle trilogy and The Diviners series, this groundbreaking New York Times bestseller and winner of the Michael L. Printz Award for literary excellence is "smart, funny, and layered," raves Entertainment Weekly.

All 16-year-old Cameron wants is to get through high school—and life in general—with a minimum of effort. It’s not a lot to ask. But that’s before he’s given some bad news: he’s sick and he’s going to die. Which totally sucks. Hope arrives in the winged form of Dulcie, a loopy punk angel/possible hallucination with a bad sugar habit. She tells Cam there is a cure—if he’s willing to go in search of it. With the help of a death-obsessed, video-gaming dwarf and a yard gnome, Cam sets off on the mother of all road trips through a twisted America . . . into the heart of what matters most.

From acclaimed author Libba Bray comes a dark comedic journey that poses the questions: Why are we here? What is real? What makes microwave popcorn so good? Why must we die? And how do we really learn to live?

"Libba Bray's fabulous new book will, with any justice, be a cult classic. The kind of book you take with you to college, in the hopes that your roommate will turn out to have packed their own copy, too. Reading it is like discovering an alternate version of The Phantom Tollbooth, where Holden Caulfield has hit Milo over the head and stolen his car, his token, and his tollbooth. There's adventure and tragedy here, a sprinkling of romance, musical interludes, a battle-ready yard gnome who's also a Norse God, and practically a chorus line of physicists. Which reminds me: will someone, someday, take Going Bovine and turn it into a musical, preferably a rock opera? I want the sound track, the program, the T-shirt, and front row tickets."—Kelly Link, author of Get in Trouble, finalist for the Pulitzer Prize

"Libba Bray not only breaks the mold of the ubiquitous dying-teenager genre—she smashes it and grinds the tiny pieces into the sidewalk. For the record, I'd go anywhere she wanted to take me."—The New York Times

"Readers will have a great time."—The Horn Book

"It's a trip worth taking."—SLJ

"Here's one book about dying that has a wicked sense of humor."—The Denver Post

"A laugh-out-loud tear-jerking fantastical voyage into the meaning of what is real in life."—VOYA

"A very messed-up book, but in a good way. . . .Hilarious, random, surreal and thought-provoking."—Guys Lit Wire

One of Entertainment Weekly's 8 Great Road-Trip Books
*
Winner of the Michael L. Printz Award
A Publishers Weekly Best Book of the Year
An Indie Next Pick
A Booklist Books for Youth Editors' Choice
An ALA Best Book for Young Adults
A Chicago Public Library Best of the Best book
A New York Public Library Book for the Teen Age

Libba Bray is the New York Times bestselling author of the Gemma Doyle trilogy (A Great and Terrible Beauty, Rebel Angels, and The Sweet Far Thing); the Michael L. Printz Award-winning Going Bovine; Beauty Queens, an L.A. Times Book Prize finalist; and The Diviners series. She is originally from Texas but makes her home in Brooklyn, New York, with her husband, son, and two sociopathic cats. Visit her at www.libbabray.com and at @libbabray on Twitter and Instagram.
Loading...
or
Not Currently Available for Direct Purchase