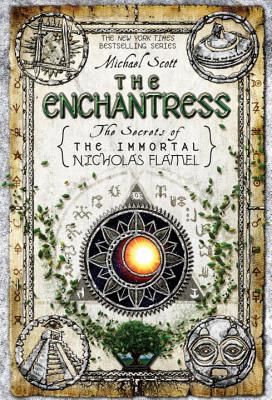 The Enchantress (The Secrets of the Immortal Nicholas Flamel #6)

“The sixth and final volume in this fabulous series following the life of the immortal Nicholas Flamel (The Alchemyst, The Magician, The Sorceress, The Necromancer, The Warlock) is Scott's best installment so far! All of the questions and mysteries from the previous books are answered, and the ending will leave you with your mouth hanging open!”
— Madison Butler, Liberty Bay Books, Poulsbo, WA
View the List

Nicholas Flamel appeared in J.K. Rowling’s Harry Potter—but did you know he really lived? And he might still be alive today! Discover the truth in Michael Scott’s New York Times bestselling series the Secrets of the Immortal Nicholas Flamel with The Enchantress, book six.

The two that are one must become the one that is all. One to save the world, one to destroy it.
Sophie and Josh Newman traveled ten thousand years into the past to Danu Talis when they followed Dr. John Dee and Virginia Dare. And it’s on this legendary island that the battle for the world begins and ends.
Scathach, Prometheus, Palamedes, Shakespeare, Saint-Germain, and Joan of Arc are also on the island. And no one is sure what—or who—the twins will be fighting for.
Today the battle for Danu Talis will be won or lost.
But will the twins of legend stand together?
Or will they stand apart—one to save the world and one to destroy it.

"The pacing never lets up, and the individual set pieces are fine mixtures of sudden action, heroic badinage and cliffhanger cutoffs."-Kirkus Reviews

Praise for The Secrets of the Immortal Nicholas Flamel series:

“Readers will be swept up.” —Kirkus Reviews, Starred

Michael Scott is the New York Times bestselling author of The Secrets of the Immortal Nicholas Flamel series, an authority on mythology and folklore, and one of Ireland’s most successful authors. A master of fantasy, science fiction, horror, and folklore, Michael has been hailed by the Irish Times as “the King of Fantasy in these isles.” The Enchantress is the sixth book in the Nicholas Flamel series. Look for book one, The Alchemyst; book two, The Magician; book three, The Sorceress; book four, The Necromancer; and book five, The Warlock, all available from Delacorte Press. You can follow Michael Scott on Twitter @flamelauthor and visit him at DillonScott.com.