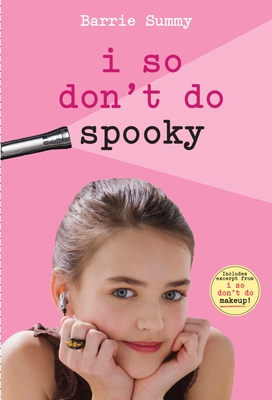 Someone’s out to get Sherry’s stepmom. . . .Can she save her before it’s too late?

Did you know that the main campus of the Academy of Spirits is at a Dairy Queen in Phoenix? Me either. Until now. Some weird stuff has been happening to my stepmother, Paula, and the Academy has asked me, Sherry Holmes Baldwin, to get to the bottom of it. They think someone’s trying to hurt her.

I really don’t want to get involved—my life is way too busy. Josh and I are celebrating two blissful months of togetherness. And my best friend, Junie, is finally showing a teeny bit of interest in clothes and makeup after years of brainiac behavior. But being that my mom is a ghost and all, me, my brother, and my dad rely on Paula a lot. So it’s not like I can just ignore what’s going on. Especially since my mom is competing at the Ghostlympics. If she comes in first place, she earns five minutes of Real Time.

And that means I’ve got to get involved in a creepy, freaky mystery.

BARRIE SUMMY is the author of the I So Don’t Do mystery series starring thirteen-year-old detective Sherry Holmes Baldwin and THE DISAPPEARANCE OF EMILY H. She lives in Southern California with her husband, their four children, two dogs, a veiled chameleon, and a fish. There was once a dwarf hamster, but let’s not go there. Visit her online at barriesummy.com and follow her on Facebook.
Loading...
or
Not Currently Available for Direct Purchase