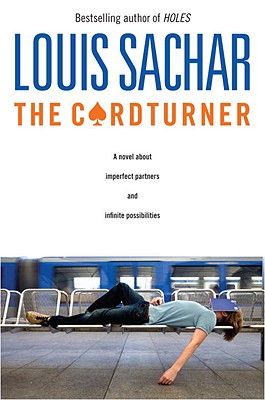 A Novel about Imperfect Partners and Infinite Possibilities

From Louis Sachar, "New York Times" bestselling author and winner of the Newbery Medal for HOLES, comes the young adult novel THE CARDTURNER, an exploration of the human condition.
How are we supposed to be partners? He can t see the cards and I don t know the rules
The summer after junior year of high school looks bleak for Alton Richards. His girlfriend has dumped him to hook up with his best friend. He has no money and no job. His parents insist that he drive his great-uncle Lester to his bridge club four times a week and be his cardturner whatever that means. Alton's uncle is old, blind, very sick, and very rich.
But Alton's parents aren t the only ones trying to worm their way into Lester Trapp's good graces. They re in competition with his longtime housekeeper, his alluring young nurse, and the crazy Castaneda family, who seem to have a mysterious influence over him.
Alton soon finds himself intrigued by his uncle, by the game of bridge, and especially by the pretty and shy Toni Castaneda. As the summer goes on, he struggles to figure out what it all means, and ultimately to figure out the meaning of his own life.
Through Alton's wry observations, Louis Sachar explores the disparity between what you know and what you think you know. With his incomparable flair and inventiveness, he examines the elusive differences between perception and reality and inspires readers to think and think again.

Louis Sachar is the author of the award-winning "Small Steps" and the "New York Times" number one bestseller "Holes, " as well as "Stanley Yelnats Survival Guide to Camp Green Lake." He is an avid bridge player. His books for younger readers include "There s a Boy in the Girls Bathroom, " "The Boy Who Lost His Face, " "Dogs Don t Tell Jokes, " and the Marvin Redpost series, among many others.