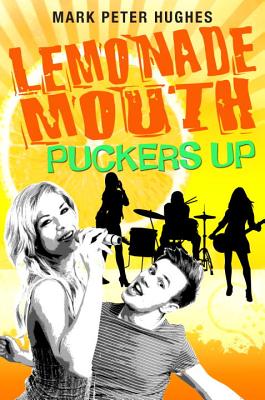 Kirkus said, "warmhearted and innocently wild, this stand-alone sequel will find appreciative fans among teen music obsessives and social activists."
Olivia, Wen, Stella, Charlie, and Mo the members of the legendary band Lemonade Mouth have been labeled many things. But just how "did "this little group of misunderstood outcasts end up rocketing from high school nobodies to household names?
In their own words, the band tells the story of the momentous summer when an overworked music promoter, an unwanted visitor from India, and an unexpected reappearance by a figure from Olivia's past shook their world and launched them on their roller-coaster ride to destiny. There are plenty of false rumors out there, but this is the real story, the continuation of the official history of Rhode Island's most influential band. Lemonade Mouth is going worldwide and taking no prisoners. The outcome will be nothing short of revolutionary.

MARK PETER HUGHES was born in Liverpool, England, and grew up in Barrington, Rhode Island. Mark's obsession with music has led to many ups and downs. Setbacks include getting ejected from eighth-grade music class for throwing a spitball and the heartbreak of learning that the accordion has no place on a thrash-metal stage. Success came later when Mark fronted an alternative-rock band. "Lemonade Mouth" is Mark Peter Hughes's second novel.
Loading...
or
Not Currently Available for Direct Purchase