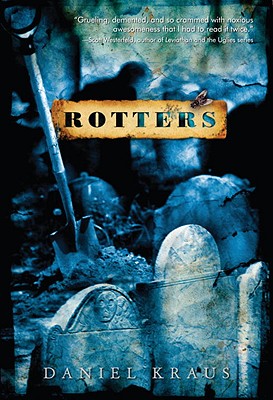 Grave-robbing. What kind of monster would do such a thing? It's true that Leonardo da Vinci did it, Shakespeare wrote about it, and the resurrection men of nineteenth-century Scotland practically made it an art. But none of this matters to Joey Crouch, a sixteen-year-old straight-A student living in Chicago with his single mom. For the most part, Joey's life is about playing the trumpet and avoiding the daily humiliations of high school.

Everything changes when Joey's mother dies in a tragic accident and he is sent to rural Iowa to live with the father he has never known, a strange, solitary man with unimaginable secrets. At first, Joey's father wants nothing to do with him, but once father and son come to terms with each other, Joey's life takes a turn both macabre and exhilarating.

Starred review, The Bulletin of the Center for Children's Books, May 2011:
"A masterly touch at thriller pacing, Kraus gives the current crop of pretentiously serious supernatural YA novels a wild run for their money."

Starred review, Booklist:
"A tour-de-force combination of reader and writer."

Kirkus Reviews:
"A cerebral romp through a fascinating, revolting underworld."

"As suspenseful and masterfully told as it is gruesome and terrifying. You'd be hard-pressed to find a coming-of-age story as satisfying as this."--Cory Doctorow, author of Little Brother and coeditor of Boing Boing

"Grueling, demented, and so crammed with noxious awesomeness that I had to read it twice."--Scott Westerfeld, author of the Uglies series

"A multi-layered, complex novel that pulls no punches. Terrific!"--Rick Yancey, author of The Monstrumologist

"A cerebral romp through a fascinating, revolting underworld."--Kirkus Reviews
"One of the darkest, wildest, most unsettling adolescent novels I've ever come across. . . . Kraus is absolutely original."--The Millions

DANIEL KRAUS is a writer, an editor, and a filmmaker. He lives with his wife in Chicago.
Loading...
or support indie stores by buying on
(This book is on backorder)