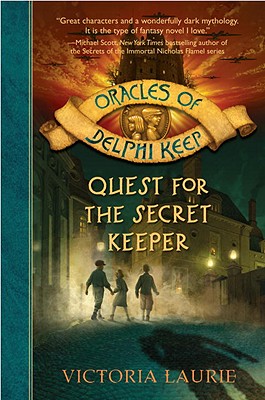 Quest for the Secret Keeper

Delphi Keep is awash in activity, and for Ian, Theo, and Carl, their safe haven might be nearing its end. The Royal Navy has taken the keep to use as a hospital and the tunnels running under the keep and the castle are ideal to set up a central communications outpost for the approaching war. The earl is happy to help the effort, but now the keep is no longer safe for the orphans and they must be evacuated to his winter residence.
Ian, Theo, and Carl know that if they're sent away, they'll no longer be protected. But more important than their safety is deciphering the third prophecy. All clues point to a quest. The orphans don't know where they must go, but they know they must rescue the Secret Keeper.
To do that, however, they need to work out who this Secret Keeper is. And what, exactly are the secrets he's keeping?

When VICTORIA LAURIE was 11, her family moved from the United States to England for a year abroad. There, she attended the American Community School at Cobham and, one day, while on a class field trip, she first glimpsed the White Cliffs of Dover. Her trip to the Cliffs, the year abroad and the childhood experiences of her orphaned grandfather left an indelible impression on the young girl such that, when she later turned to a career in writing, this was a story she felt she had to tell. You can visit Victoria at oraclesofdelphikeep.com.
Loading...
or
Not Currently Available for Direct Purchase