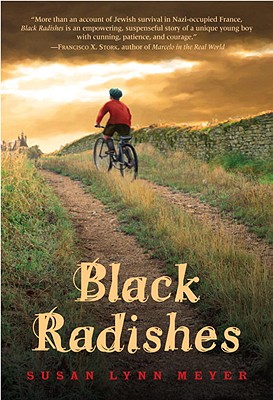 Sydney Taylor Honor Award Winner Black Radishes is a suspenseful WWII/Holocaust story, in which one boy learns what it means to be Jewish and French at a time when everything is changing.

It is March of 1940. The French believe that their army can protect them from Nazi Germany. But is Paris a safe place for Jews? Gustave’s parents don’t think so. Forced to leave behind his best friend, the mischievous Marcel, and his cousin Jean-Paul, Gustave moves with his mother and father to Saint-Georges, a small village in the countryside.
During April and May, Nazi Germany invades one country after another. In June, the French army is defeated, and Paris is occupied. Saint-Georges is still part of the free zone, but the situation there is becoming increasingly precarious.
Then Gustave meets Nicole, a Catholic girl who works for the French Resistance. Along with her father, Nicole tries to find a way to smuggle Jean-Paul, Marcel, and their families into Free France so that they can all escape to America. It is Gustave, however, who comes up with a plan that just might work. But going into Occupied France is a risky thing to do when you are Jewish.
Inspired by her father’s experiences as a Jewish child living in France during World War II, Susan Lynn Meyer tells the story of a family’s day-to-day struggles in a country that may not be able to keep its promise of “Liberty, Equality, and Fraternity.”

Susan Lynn Meyer was born in Baltimore and grew up hearing her father's stories about his French childhood and his family's escape from the Nazis. She studied literature and is now a professor of English at Wellesley College, where she teaches Victorian and American literature. The author lives with her husband and daughter in Sherborn, Massachusetts. Black Radishes is her first novel.
Loading...
or
Not Currently Available for Direct Purchase