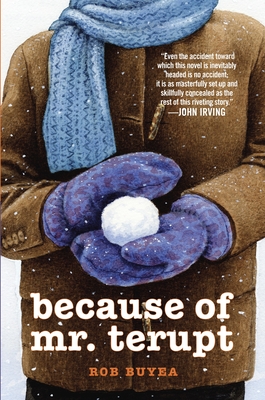 Because of Mr. Terupt

“Sometimes we don't realize what have until it's gone. While the kids in Mr. Terupt's class think he's a good teacher, they have no idea the influence he's had on them until he's gone from their classroom. Now they must do all they can to get him back, but they may be too late. Rob Buyea has created a stunning and moving debut novel.”
— David Richardson, The Blue Marble, Fort Thomas, KY
View the List

Seven students are about to have their lives changed by one amazing teacher in this school story sequel filled with unique characters every reader can relate to.

It’s the start of a new year at Snow Hill School, and seven students find themselves thrown together in Mr. Terupt’s fifth grade class. There’s . . . Jessica, the new girl, smart and perceptive, who’s having a hard time fitting in; Alexia, a bully, your friend one second, your enemy the next; Peter, class prankster and troublemaker; Luke, the brain; Danielle, who never stands up for herself; shy Anna, whose home situation makes her an outcast; and Jeffrey, who hates school.

They don’t have much in common, and they’ve never gotten along. Not until a certain new teacher arrives and helps them to find strength inside themselves—and in each other. But when Mr. Terupt suffers a terrible accident, will his students be able to remember the lessons he taught them? Or will their lives go back to the way they were before—before fifth grade and before Mr. Terupt?

Find out what happens in sixth and seventh grades in Mr. Terupt Falls Again and Saving Mr. Terupt. And don't miss the conclusion to the series, Goodbye, Mr. Terupt, coming soon!

"The characters are authentic and the short chapters are skillfully arranged to keep readers moving headlong toward the satisfying conclusion."--School Library Journal, Starred

Praise For Because of Mr. Terupt…

“Even the accident toward which this novel is inevitably headed is no accident; it is as masterfully set up and skillfully concealed as the rest of this riveting story.” —John Irving

"This powerful and emotional story is likely to spur discussion."—Publishers Weekly

"No one is perfect in this feel-good story, but everyone benefits, including sentimentally inclined readers."—Kirkus Reviews

"Compelling. . . . Readers will find much to ponder on the power of forgiveness."—Booklist

Rob Buyea taught third- and fourth-graders in Bethany, Connecticut, for six years before moving to Massachusetts, where he taught high school biology and coached wrestling for seven years at Northfield Mount Hermon. Mr. Terupt Falls Again and Saving Mr. Terupt are companion novels to Because of Mr. Terupt. Currently, Rob is a full-time writer and lives in North Andover, Massachusetts, with his wife and three daughters.