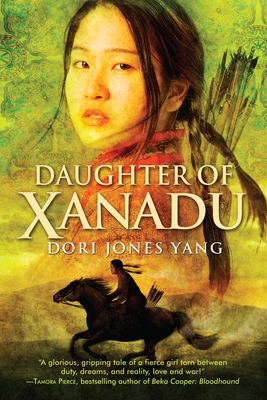 Athletic and strong willed, Princess Emmajin's determined to do what no woman has done before: become a warrior in the army of her grandfather, the Great Khan Khubilai. In the Mongol world the only way to achieve respect is to show bravery and win glory on the battlefield. The last thing she wants is the distraction of the foreigner Marco Polo, who challenges her beliefs in the gardens of Xanadu. Marco has no skills in the "manly arts" of the Mongols: horse racing, archery, and wrestling. Still, he charms the Khan with his wit and story-telling. Emmajin sees a different Marco as they travel across 13th-century China, hunting 'dragons' and fighting elephant-back warriors. Now she faces a different battle as she struggles with her attraction towards Marco and her incredible goal of winning fame as a soldier.

Fluent in Mandarin, DORI JONES YANG was a foreign correspondent in China for Business Week. She also wrote a business book about Starbucks Coffee Company. She and her family have traveled to Mongolia and visited the site of Xanadu, now in ruins, and the site of Khubilai Khan's palace at Khanbalik, which is now the Forbidden City in Beijing.
or support indie stores by buying on
Copyright © 2020 American Booksellers Association