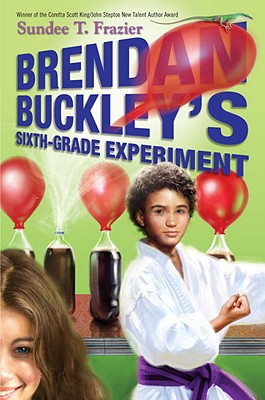 Read about Brendan, a biracial boy who loves science, and his middle school adventures in this sequel to the Coretta Scott King/John Steptoe New Talent Author Award-winner Brendan Buckley's Universe and Everything in It.
Brendan Buckley is headed to middle school on a whole new adventure. When his alternative energy idea gets him paired with new girl Morgan Belcher for the national science competition, Brendan is skeptical. But their partnership clicks, and they embark on a methane-producing experiment involving bottles, balloons, and the freshest cow manure they can find.
As Brendan spends more time on the experiment, he has a lot of big questions: Does his police detective dad really think he's a science-nerd whimp? Will he and Khalfani, his best friend and Tae Kwon Do sparring partner, remain best friends? And can Brendan prove that his scientific pursuits really could be world-changing?
*Brendan is both nerdy and immensely likable. . . . The prickliness between Brendan and his father is handled with particular deftness. The Bulletin of the Center for Children's Books, Recommended
"Middle schoolers and science projects make for enjoyable combustible fiction. . . . The role of racism and family history is key in shaping these multifaceted characters. . . . appealing Brendan should keep readers fully engaged." Kirkus Reviews

Children will enjoy the ups and downs of Brendan's sixth-grade year and wait eagerly for his future exploits. School Library Journal

The complexity of the characters and the strength of Brendan's family sets the book apart, as does Brendan's biracial identity. Booklist

SUNDEE T. FRAZIER is the author ofBrendan Buckley's Universe and Everything in It, for which she received the Coretta Scott King/John Steptoe New Talent Author Award, and the highly acclaimedThe Other Half of My Heart.Learn more about her and her books at sundeefrazier.com."

School Library Journal, January 1, 2012:
In this sequel to Brendan Buckley’s Universe and Everything in It (Delacorte, 2007), Brendan looks at everything as a scientist does, from his rock crystals to his experiments and his pet anoles. He keeps a “log” that he refuses to call a diary. He tracks his scientific findings and his feelings about the social world of middle school. He meets a new girl at his grandfather’s geology club who is also a scientist. While she seems okay at geology club, he is not sure he wants to be her friend at school. He has his guy friends to worry about and does not want to be teased about her. Young readers will have plenty to relate to here. Brendan falls out with friends, has romance issues, faces the loss of a pet, and is constantly trying to impress his imposing father. On top of that, his family is preparing to adopt a baby, which adds plenty of stress to the household. The boy is biracial, and his grandmother calls him her “milk chocolate.” The characters are well developed and the story is realistic. The back of the book is filled with scientific facts about biomass and anoles. Children will enjoy the ups and downs of Brendan’s sixth-grade year and wait eagerly for his future exploits.

Kirkus Reviews, December 1, 2011:
A few months older and proud owner of Einstein, a small, green anole, the eponymous budding scientist of Brendan Buckley’s Universe and Everything In It, winner of the 2007 Coretta Scott King/John Steptoe New Talent Award, returns to grapple with new challenges in this likable sequel.

Last seen, Brendan had reclaimed his estranged grandfather, helping to heal the longstanding family rift arising from his parents’ interracial marriage. Entering middle school, Brendan’s goals are more universal and more daunting: negotiating puberty and fitting in with his peers. Complicating matters is his equally science-minded classmate Morgan, who has a major crush on him. Paired with her for a science project (cow poop is central), Brendan worries their friendship will alienate his guy friends. His parents have their own obsessions—gaining official approval to adopt a baby (Mom) and carving time from work to earn a college degree (Dad). Middle schoolers and science projects make for enjoyably combustible fiction, as Greg Leitich Smith demonstrated in Ninjas, Piranhas, and Galileo (2003). Underlying Frazier’s light and humorous tone lies a serious question science can’t answer: Why does Dad focus only Brendan’s martial-arts training, ignoring his scientific achievements? The role of racism and family history is key in shaping these multifaceted characters, but it is largely left for readers to infer.

Events may be less dramatic than realistically nuanced, and pacing is relaxed, but appealing Brendan should keep readers fully engaged.