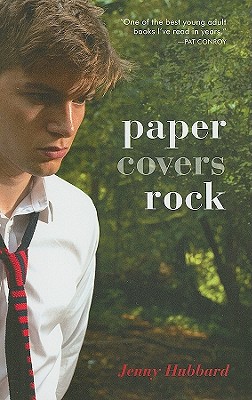 Michael L. Printz Honor Award-winning author of "And We Stay "Jenny Hubbard's powerful debut novel.
"One of the best young adult books I've read in years."--PAT CONROY
""Paper Covers Rock" is dazzling in its intensity and intelligence, spell-binding in its terrible beauty." --KATHI APPELT, author of the Newbery Honor Book The Underneath
Sixteen-year-old Alex has just begun his junior year at a boys' boarding school when he fails to save a friend from drowning in a river on campus. Afraid to reveal the whole truth, Alex and Glenn, who was also involved, decide to lie. But the boys weren't the only ones at the river that day . . . and they soon learn that every decision has a consequence.
A William C. Morris Debut Award Finalist
A "Booklist "Editors' Choice
A "Horn Book" Fanfare
A "School Library Journal" Best Book of the Year
A "Publishers Weekly" Flying Start Author
A "Booklist "Top 10 First Novel for Youth
An ABC Top 10 New Voices Selection
* "The poignant first-person narration is a deftly woven mixture of confessional entries, class assignments, poems, and letters. . . . A] tense dictation of secrets, lies, manipulation, and the ambiguity of honor." --"The Horn Book Magazine," Starred
* "In the tradition of John Knowles's "A Separate Peace." . . . A powerful, ambitious debut." --"Publishers Weekly," Starred
"
* "Those who are looking for something to ponder will enjoy this compelling read." --School Library Journal," Starred
* "This novel introduces Hubbard as a bright light to watch on the YA literary scene." --"Booklist," Starred.

Starred Review, School Library Journal, June 2011:
"The story builds to a climax that will have readers on edge. It could be read alongside many of the classics that deal with friendship and loyalty, as well as deceit...Those who are looking for something to ponder will enjoy this compelling read."

Starred Review, Booklist, July 1, 2011:
"Both plotting and characters are thoroughly crafted in this stellar first novel. The poetry that Hubbard produces from Alex’s pen is brilliant, and the prose throughout is elegant in its simplicity. Reminiscent of John Knowles’ classic coming-of-age story, A Separate Peace (1959), this novel introduces Hubbard as a bright light to watch on the YA literary scene."

Michael L. Printz Honor Award-winning "And We Stay" is Jenny Hubbard s second novel. Her first, "Paper Covers Rock," was a William C. Morris Debut Award Finalist. A former English teacher, Jenny writes books and plays in her hometown of Slisbury, North Carolina, where she lives with her husband, a high school math teacher, and their rescue dog, Oliver. You can find Jenny on Facebook, follow her (and Oliver) on Twitter at @HubbardWrites, and visit her website at jennyhubbard.com."
Loading...
or
Not Currently Available for Direct Purchase