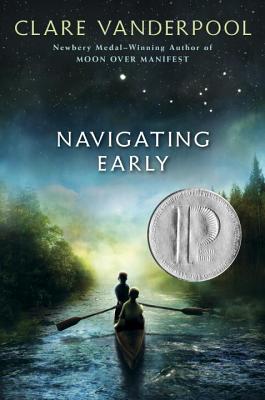 “Newbery Award-winner Vanderpool has done it again! This terrific coming-of-age story begins as WWII comes to an end and so many people have lost so much. After Jack Baker's mother dies suddenly, his father returns from the front lines, uproots him from the only home he's ever known in Kansas, and enrolls Jack in a boarding school near his naval base in Maine. Jack has learned how to count on his own sadness and loss, but when he meets Early Auden, sometime-student and full-time puzzle, Jack's life takes a surprising turn. Fall break finds the boys on a quest to find a bear, a timber rattler, and, maybe, a brother. I read this in one sitting, and you will too!”
— Anne Holman, The King's English, Salt Lake City, UT
View the List

“Just the sort of book that saves lives by igniting a passion for reading.” —James Patterson

From the author of Newbery Medal winner Moon Over Manifest comes the odyssey-like adventure of two boys’ incredible quest on the Appalachian Trail.

When Jack Baker’s father sends him from his home in Kansas to attend a boys’ boarding school in Maine, Jack doesn’t know what to expect. Certainly not Early Auden, the strangest of boys. Early keeps to himself, reads the number pi as a story, and refuses to accept truths others take for granted. Jack, feeling lonely and out of place, connects with Early, and the two become friends.

During a break from school, the boys set out for the Appalachian Trail on a quest for a great black bear. As Jack and Early travel deeper into the mountains, they meet peculiar and dangerous characters, and they make some shocking discoveries. But their adventure is only just beginning. Will Jack’s and Early’s friendship last the journey? Can the boys make it home alive?

“Just the sort of book that saves lives by igniting a passion for reading.”
–James Patterson

The Washington Post, January 1, 2013:
"Clare Vanderpool deftly rows this complex, inventive novel — her most recent since her Newbery-winning 'Moon Over Manifest' — to a tender, surprising and wholly satisfying ending."

Starred Review, Booklist, December 15, 2012:
“Newbery Medal-winning author Vanderpool’s sharp, honest narrative, sparkling with the stars of the night sky, pieces together an elaborate, layered plot with precision, weaving multiple threads into a careful, tidy conclusion perfectly suited for those, like Jack and Early, who want to believe.”

The Bulletin of the Center for Children's Books, February 2013:
"This story of a poignant friendship of two heartbroken boys shifts quickly among genres...moving into territory more often claimed by high fantasy quests, heroic epics, wilderness adventures, and even mysteries. The incorporation of these familiar tropes give the book broad and fascinating appeal, and those that trust Early—and Vanderpool—to lead them through the treacherous woods will be pondering and debating the surreal experience for some time to come."

The Horn Book, March/April 2013:
"While the writing is as minutely observant as it was in the author’s Newbery-winning debut, Moon over Manifest, this book has a stronger trajectory, developed by the classic quest structure that emerges when Vanderpool sends the boys into the Maine wilderness."

CLARE VANDERPOOL's debut novel, Moon Over Manifest, won the 2011 Newbery Medal for the most distinguished contribution to children's literature. This second novel will continue to astound readers with Clare's incredible writing prowess.
Loading...
or
Not Currently Available for Direct Purchase