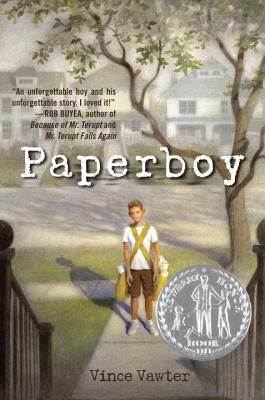 Starred Review, Booklist, April 15, 2013:
“The well-crafted characters, the hot Southern summer, and the coming-of-age events are reminiscent of To Kill a Mockingbird… This paper boy is a fighter and his hope fortifies and satisfies in equal measure.”

"Paperboy offers a penetrating look at both the mystery and the daily frustrations of stuttering. People of all ages will appreciate this positive and universal story as I did, but it will be particularly meaningful to anyone who has ever struggled with stuttering."—Jane Fraser, president of The Stuttering Foundation of America

“In a compelling climax, he, still stuttering, proudly announces his real name; the moment is as eloquent as his story.” —The Horn Book

VINCE VAWTER, a native of Memphis, retired after a forty-year career in newspapers, most recently as the president and publisher of the Evansville Courier & Press in Indiana. Paperboy is his first novel.